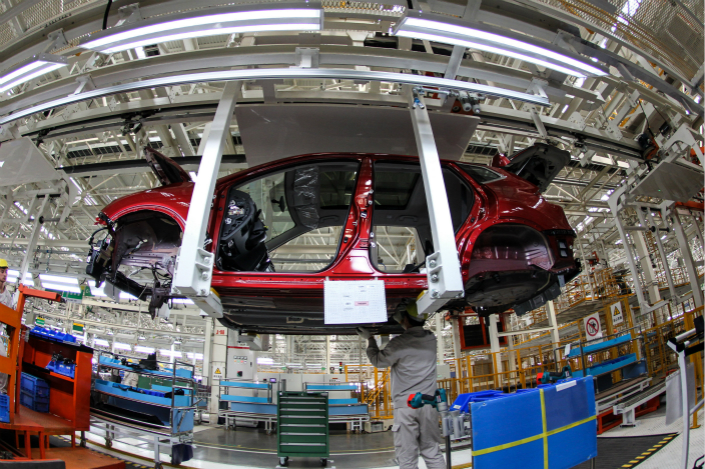 Renault-Nissan and Dongfeng Motor will team up to make electric vehicles in Central China. The new project is slated to start production in 2019 at Dongfeng’s plant in Shiyan, Hubei province. Above, an SUV gets built at the Dongfeng-Nissan plant in the northeastern city of Dalian in October 2014. Photo: Visual China

The new project, eGT New Energy Automotive Co. Ltd., is set to start production in 2019 at the Dongfeng plant in the city of Shiyan in Central China’s Hubei province, the French-Japanese alliance said in a statement on Tuesday. The venture will have a production capacity of 120,000 vehicles a year.

“The establishment of the new joint venture with Dongfeng confirms our common commitment to develop competitive electric vehicles for the Chinese market,” said Carlos Ghosn, chairman and chief executive officer of the Renault-Nissan Alliance.

China is the world’s largest car market, and has been one of the biggest growth drivers in recent years for many Western brands such as General Motors, Ford and Volkswagen. But a new Beijing program announced earlier this year will require a significant portion of all of those companies’ sales to come from new-energy vehicles starting in 2018.

Renault-Nissan and others are racing to build up their capability to offer new-energy vehicles in China to comply with the new quota system designed to promote the technology and clean up the country’s air. The latest version of the plan gave quotas of 8%, 10% and 12% for car producers for the years 2018, 2019 and 2020 respectively. The percentages are roughly related to a manufacturer’s new-energy car sales, but are not a direct percentage of its total vehicles that are new-energy models.