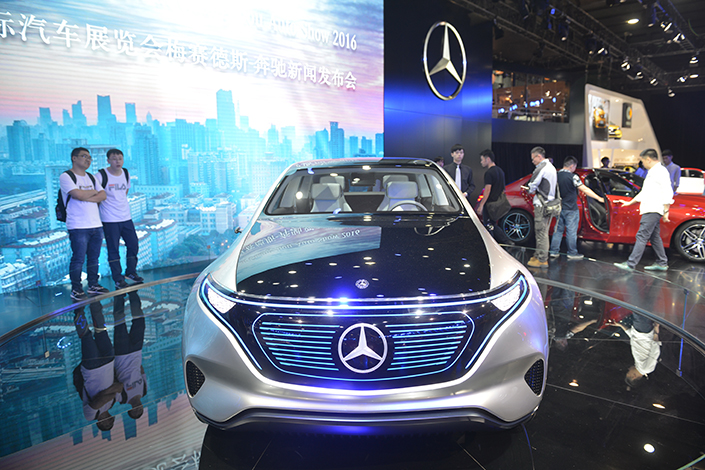 Daimler AG has announced it will build an electric-vehicle battery plant in China, part of a broader agreement that will see Daimler and BAIC Motor Co. Ltd. spend 5 billion yuan to produce electric vehicles under Daimler’s Mercedes-Benz brand. Above, a Mercedes-Benz electric vehicle is displayed during a car exhibition in Guangzhou, Guangdong province, on Nov. 18. Photo: IC

Daimler said investment in the plant will total in the hundreds of millions of euros, and that local production of battery-powered electric vehicles (EVs) will begin in 2020.

“We are investing in the world’s largest market for battery electric vehicles,” said Hubertus Troska, a member of Daimler’s board of management responsible for Greater China. “By 2025, the Chinese market will have a substantial share in sales of Mercedes-Benz electric vehicles. Therefore, local production will be key to the success of our EV portfolio, and crucial to flexibly serving local demand for electric vehicles.”

Daimler said the new factory will be part of a 1 billion euro ($1.13 billion) global battery production network that the company is developing for Mercedes-Benz EVs worldwide. It will also be the first facility in the network outside of its home German market. The company added its estimate that 15% to 25% of all of its Mercedes-Benz car sales will be for EV models by 2025.

Announcement of the new framework comes just a month after the pair announced they will strengthen their collaboration in new-energy vehicles in China. As part of that commitment, Daimler said it will acquire a minority stake in BAIC’s electric car unit, Beijing Electric Vehicle Co. Ltd.

Daimler is just one of many domestic and foreign automakers racing to prepare for a difficult set of targets for sharply boosting their new-energy car sales under a new rule from Beijing, which wants to clean up the country’s polluted air and foster development of such cutting-edge technology.

Last month the country unveiled a new draft of the rule, which largely left intact previous targets despite objections from foreign manufacturers. German automakers were reportedly particularly nervous about the new requirements due to their relative lack of preparation for such a move in their China business.

The latest version of the plan gave quotas of 8%, 10% and 12% for car producers under the program for the years 2018, 2019 and 2020 respectively. The percentages are derived from complex calculations related to emissions levels for each manufacturer’s total car output in a given year, but are not a direct percentage of its total vehicles that are new-energy cars.

Seeking to cash in on Beijing’s desire to foster the industry’s development, U.S. giant Tesla Inc. also confirmed last month it is in talks to build its own EV factory in Shanghai. It added that no deal has been reached yet, but that it expected to have more clearly defined production plans by the end of the year.