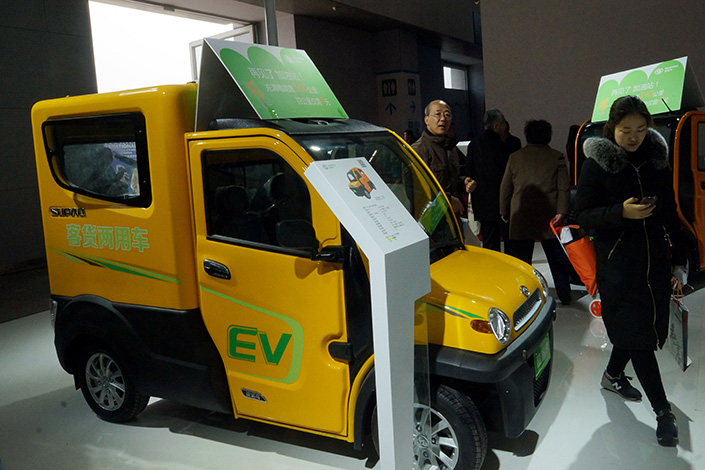 The Legislative Affairs Office of the State Council is mandating new-energy vehicle quotas of 8%, 10% and 12% for car producers for the years 2018, 2019 and 2020 respectively. Above, a newsenergy vehicle is displayed at an E-bike expo in Tianjin on March 25. Photo: Visual China

(Beijing) — China has largely left intact an earlier plan to encourage more clean-energy car production, according to a new draft proposal, despite earlier protests from German automakers that complained that the targets would be difficult to meet.

A new version of the plan published on Tuesday by the Legislative Affairs Office of the State Council gave quotas of 8%, 10% and 12% for car producers under the program for the years 2018, 2019 and 2020 respectively. The percentages are derived from complex calculations related to emissions levels for each manufacturer’s total car output in a given year, but are not a direct percentage of its total vehicles that are new-energy cars.

Those three percentages are unchanged from an original draft of the plan published in September, which had been opposed by German automakers that said the quotas would be difficult to meet. The latest draft included some changes to the way that points are calculated. Points under the new system would also be tradable, allowing companies that surpassed their respective quotas to sell some of the excess amount to others that fell short of their targets.

A source at the Ministry of Industry and Information Technology (MIIT), which oversees new-energy vehicles, told Caixin in March that adjustments were being planned but did not elaborate. Reuters reported last week that China had agreed to delay implementation of the system until 2019, responding to concerns by the German automakers.

The issuance of a second draft proposal and period for comment are relatively uncommon and indicate the process hasn’t reached a conclusion yet, a source at the Legislative Affairs Office told Caixin.

The latest program is part of China’s broader efforts to promote clean-energy transport and power sources in a bid to clean up the nation’s polluted air and develop cutting-edge technologies that can someday be exported. As part of that push, China is aiming to reach annual new-energy car sales, which includes both pure electric and hybrid cars, by 2020.