By Leng Cheng and Li Yuqian 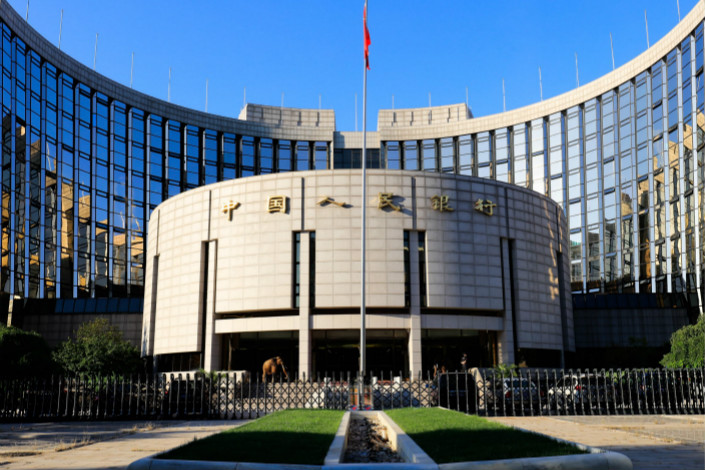 As the yuan appears stronger and economic growth is poised to slow further, there is an increasing call for the central bank to lower the reserve requirement ratio for commercial banks. Photo: Visual China

China’s campaign to curb financial risks and rein in leverage has led to a squeeze on the amount of cash flowing through the financial system and pushed up interest rates in the interbank market where banks borrow from each other.

Although still in the minority, calls are growing for the People’s Bank of China (PBOC) to cut the amount of customers’ deposits lenders have to keep in reserve at the central bank, known as the reserve requirement ratio (RRR), which would release a flood of cash into the system, easing the strain on liquidity and supporting bank lending. The PBOC hasn’t cut the reserve ratio, which stands at 17% for the biggest banks, since March 2016, preferring to use other monetary tools such as open-market operations and its medium-term lending facility (MLF) to adjust liquidity in the market.

Supporters say that one of the main constraints holding back the PBOC — yuan depreciation — no longer exists and point to the Chinese currency’s appreciation of almost 6% against the dollar this year. They also note that an indicator reflecting banks’ cash buffers, the excess reserve ratio, has dropped to a near-record low of 1.35% from an average of 2.05% last year, suggesting lenders are running short of money. On top of all that, economic growth momentum is slowing, reducing pressure on the central bank to keep the RRR at its current high level.

“A window of opportunity has opened for the PBOC to cut the required reserve ratio,” said Deng Haiqing, chief economist with JZ Securities Co. “First, the yuan has entered an appreciation phase which leaves more room for the PBOC to cut the reserve requirement ratio without worrying about depreciation. Second, the PBOC has strengthened its management of market expectations so the chance of the market misreading the cut as monetary loosening has declined. So it’s time for the central bank to put an RRR cut back on the agenda.”

Liquidity in China’s interbank market, which oils the wheels of the financial system and is the main source of funding for banks and financial institutions, has been tight in September as the central bank continued its deleveraging campaign and made it more difficult for institutions to use borrowed money to speculate. Other seasonal factors such as tax payments, quarter-end Macro Prudental Assessment tests on the banks, and rising demand for cash ahead of the week-long National Day public holiday, are also putting pressure on the availability of funding.

The PBOC has been forced to pump money into the financial system to avoid volatility in interest rates and ward off any possibility of a cash crunch. It poured a net 260 billion yuan ($39.6 billion) into the interbank market through open-market operations last week, the most since the last week of July, ending a three-week-long cash drain that totaled 940 billion yuan. So far this week, the central bank has added a further 450 billion yuan.

That hasn’t done much to bring down market interest rates, however. The benchmark interbank money-market rate, the seven-day repo, has risen to 2.9426% from 2.7640% in two weeks, while the overnight repo rate jumped to 2.8986% on Tuesday from 2.5961% on Sept. 6. The overnight Shanghai interbank offered rate (Shibor), a measure of borrowing costs among Chinese commercial lenders, jumped 19.6 basis points to 2.832% in just eight days. The higher rates are increasing borrowing costs for banks and financial institutions and squeezing their profit margins.

A cut in the RRR might be a logical next step for the PBOC as it would release around 700 billion yuan into the financial system, bring down market rates and offer a more permanent solution to the liquidity squeeze. But the central bank has voiced strong opposition to cutting the reserve requirement ratio since early 2016, citing the pressure it would put on the yuan to depreciate and the strong easing signal such a move would send to the market.

“Frequent reserve-ratio cuts will inject large amounts of liquidity and bring down market rates,” the PBOC said in a report in August 2016. “This will fuel policy easing expectations because of its relatively strong message, which will add to yuan depreciation pressure and a decline in foreign-exchange reserves.”

Those reasons are still valid, many economists say, and as a result, a cut to the RRR is not going to happen in the near term.

“The pressure on the exchange rate has diminished and that opens up some space for monetary policy,” said Jiang Chao, an analyst at Haitong Securities Co. “But economic growth hasn’t lost speed, and the main focus remains risk prevention and deflating asset bubbles. It would send too strong a signal of monetary policy easing, which contradicts the government’s ongoing deleveraging campaign.”

The central bank said in its quarterly monetary policy implementation report last month that it would maintain a stable and neutral monetary policy and emphasized the importance of guarding against systemic risks, indicating that deleveraging and financial risk are still its main priorities.

Xie Yaxuan, chief economist at China Merchants Securities Co., said that if the reserve requirement ratio was lowered, interbank interest rates would decline and bonds prices could surge, which would be the exact opposite of what the authorities are trying to achieve.

Xie said many nonbank financial institutions added leverage or raised money through interbank negotiable certificate deposits (NCDs) when the PBOC was adding liquidity to avoid a cash crunch in June. The same thing would likely happen again if the RRR was cut.

Other analysts, including Li Huiyong, chief economist at Shenwan Hongyuan Securities Co., say the central bank’s use of other instruments in its monetary policy toolbox, such as the MLF, make a reserve-ratio cut unnecessary.

Li estimates that lowering the RRR by 50 basis points would release approximately 700 billion yuan of cash into the financial markets, an amount that could easily be supplied via the MLF, one of several new targeted lending tools introduced by the PBOC in 2014 to supplement its management of liquidity. Before these instruments were used, the central bank relied mainly on short-term open-market operations and the system-wide RRR to control the supply of money to the interbank market and financial system.

The MLF allows the central bank to make targeted injections or withdrawals of money through loans of between three months and one year to selected banks, giving it better control over where the funds go.