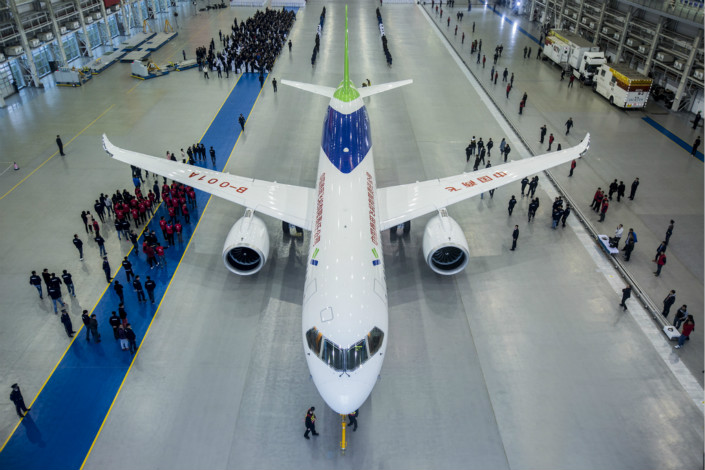 The maker of China’s first domestically made passenger plane, the C919, said it has landed 130 new orders, bringing the total number to 730.

The narrow-body C919, developed by the state-owned Commercial Aircraft Corp. of China (COMAC), is China’s first single-aisle large passenger aircraft built in accordance with international civil aviation regulations. It was designed to compete with the airline industry workhorses Boeing 737 MAX and Airbus A320.

Agricultural Bank of China (ABC) Financial Leasing Co. became the first customer to expand its order after the C919 completed its maiden flight in May. The ABC unit’s second order for 30 jets was in addition to the 45 jets it ordered in 2012.

ABC Financial Leasing Chairman Wang Yigang said the company has made down payments of about 500,000 yuan for each firm order.

“This is the largest number of orders since the maiden flight of the C919, which indicates the confidence and recognition of the market toward the plane,” COMAC said in a statement.

COMAC is pushing to get the C919 certified in Europe. Chinese Premier Li Keqiang asked Germany to help with the European Aviation Safety Agency when he met in May with German Chancellor Angela Merkel.

The COMAC forecast included 5,255 regional jets over the next 20 years, twice as many as Boeing projected. Yang Yang, COMAC’s market research director, said the company’s estimate is closer to those of Bombardier and Embraer, which specialize in regional jets. He disclosed that COMAC expects to deliver its first ARJ21, a 78-seat regional jet, in 2018.