By Chen Mengfan and Wu Gang 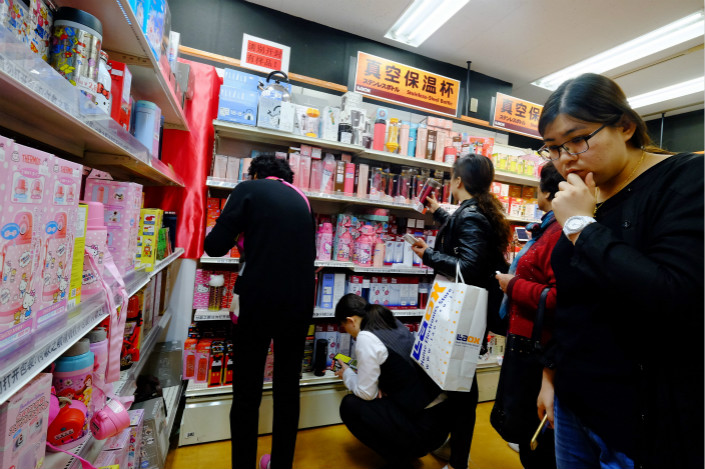 Tighter tax rules on imported consumer goods bought online have been postponed in part to dissuade people from going abroad to shop, as the pictured Chinese visitors to Japan are doing, according to a Ministry of Commerce spokesman. Photo: Visual China

China has postponed stricter taxation on imported consumer goods bought online for another year — to the end of 2018 — in order to encourage consumption, the Ministry of Commerce said on Thursday.

The State Council on Wednesday decided to hold off on enacting the new tax regime designed to “regulate” foreign products purchased through cross-border e-commerce platforms.

The plan, which was first announced in April 2016, would make it tougher for people to avoid paying taxes — or obtain relatively low tax rates — on many consumer items such as healthcare products and cosmetics.

The new tax regime was already postponed once before. In late 2016, the government announced that it would postpone enacting the rules until the end of 2017.

Ministry of Commerce Spokesman Gao Feng said on Thursday that the decision was based on the fact that e-commerce imports have boosted supply and consumption in the domestic market. These imports have also encouraged Chinese consumers who would have otherwise gone abroad to shop to instead spend their money at home.

Xu Ping, president of Henan Bonded Group, told Caixin that the extension of the transitional period shows that the current taxation policy is working, and it’s wise not to rush a new policy that could hurt the market.

However, some worry that uncertainty over the tax policy may weigh on businesses. Xue Jun, vice dean of Peking University Law School, said another one-year delay will make trading companies more anxious, causing them to make speculative, short-term business decisions, he said.