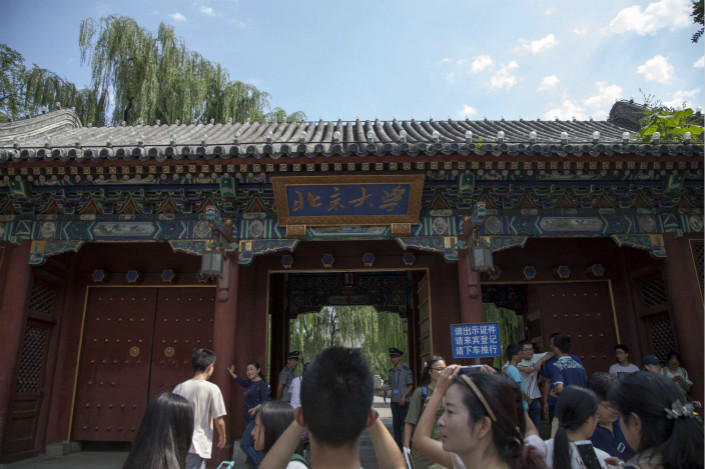 China’s ministries of education and finance and its top economic planner have released a long-anticipated list of 42 universities, including Peking University in Beijing, to be transformed into world-class learning institutions. Photo: Visual China

(Beijing) — Dozens of Chinese universities are expected to launch a fresh spending spree to boost their international rankings after the government announced plans to create world-class higher-education institutions by 2050.

The ministries of education and finance and the country’s top economic planner, the National Development and Reform Commission, released a long-anticipated list of 42 universities that have been handpicked to be transformed into world-class learning facilities. The list includes top schools such as Peking University and Tsinghua University in Beijing and Sun Yat-sen University in Guangzhou.

Another 96 universities have been ordered to improve their research and teaching facilities in specific fields to match top-tier global institutions, according to a statement released by the Ministry of Education.

The ambitious plan comes as China seeks to transform itself into a science and technology powerhouse, committing 2.5% of the country’s GDP to research and development each year. But, it threatens to widen the gap between a few elite schools and other education facilities in the country, academics warned.

Instead, the education ministry said in a separate statement yesterday that the list is “a starting point” that will prompt the schools to improve their research and academic performance.

Some of the schools on the list had already spent millions of yuan to improve facilities well before the government plan was announced.

For example, the prestigious Sun Yat-sen University has asked the government for an additional 480 million yuan ($72.82 million) this year to finance “projects to help the school move toward a world-class university,” the school’s budget report said without offering details.

Renmin University in Beijing received 550 million yuan in funding in 2017 for similar purposes, the school said.

Caixin’s research shows that regional governments have earmarked at least 55 billion yuan for programs to help universities boost their standing by upgrading their infrastructure and lab facilities and enlist top talent.

However, the central government hasn’t disclosed the entire sum set aside for the initiative. Still, it will focus on nurturing a few cherry-picked schools that have already excelled in several fields, said professor Liu Haifeng, head of Xiamen University’s Education Research Institution.

This means the gap between a few elite schools and the rest will remain, according to Liu, who sat on a national committee to select the schools.

China had nearly 2,600 universities at the end of 2016, data from the education ministry showed. But many were underfunded, and previous attempts to channel resources to create “top notch” universities included only a few schools in less developed central and western China. For example, the 39 universities selected for funding under the ambitious “985 Project,” or the 110 institutions picked for the “211 Project” were mostly from the country’s rich east coast or southern provinces.

The new plan to help Chinese universities’ quest for an international profile includes six universities in underdeveloped regions, such as Northeastern University in Shenyang and Northwest A&F University, which specializes in agriculture and forestry, in Yangling in the northwestern province of Shaanxi.

“However, distribution of funding under the new plan would follow in the footsteps of the 985 or 211 projects, meaning there won’t be a major increase in grants for the vast majority of schools excluded from these lists,” he said.