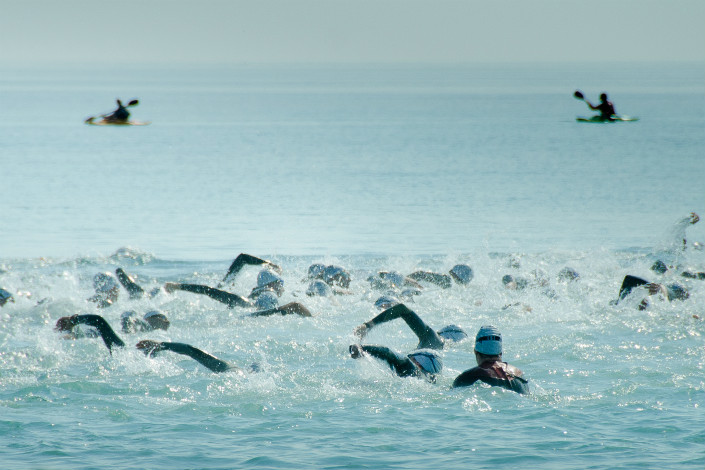 Most of China’s open water swimming events are crammed into the summertime National Swimming Week. Last year more than 120 were held over the week. Photo: Visual China

When Charles Zhang inched toward the finish line with a distorted breaststroke, pain was etched on his face after swimming for over four hours.

“Two kilometers! Slightly stung by a tiny jellyfish, but ignored and kept swimming;” Zhang shared on his WeChat account.

“Last 3 kilometers were extremely frustrating. My neck was twisted in pain,” he wrote.

The 52-year-old chairman of Sohu.com Inc., owner of China’s second largest mobile search engine Sogou, was the last swimmer to finish the 13-kilometre route across the Xingcheng Strait near the northern city of Dalian last month.

The sports evangelist — who had already climbed Mount Everest — wrote “I made it! I feel like I’m a great man, battered but finally surviving it all!”

“Open water swimming could become the next hot spot for China’s sports industry after marathons,” said Zhang Jian, dean of Beijing Sport University and the first Chinese swimmer to make it across the approximately 32-kilometer-wide English Channel.

“Famous entrepreneurs like Charles Zhang, or other business figures, are often trendsetters for new sports,” he added. “They can help boost consumer sentiment and bolster the new high-end sports economy.”

A Nielsen survey last year found swimming was the third most popular sport among Chinese people, followed by running and badminton. Swimming in open waters has always been popular among those who dislike the limited space and pungent scent of chlorine in swimming pools. Many people go to rivers, lakes or seas year around, even in winter when the water cools to below 10 degrees Celsius.

But China still lacks specific rules or guidelines for mass open water swimming events, raising concerns over athletes’ safety. The CSA says it’s preparing a set of national rules for the sport and mass events to protect swimmers and pave the way for the further development of supporting industries.

“Rules will come soon, but reviews, improvements and localization could take another two to four years,” said Zhang Jian.

“China is still at an early stage. Standardization is an urgent priority, especially as the sport goes mass-scale,” he added.

A sports boom is just beginning in the world’s second largest economy, amid the rapid expansion of a middle class that is keen on staying in shape, according to the Nielsen report. To tap into its potential, China’s State Council rolled out an ambitious plan in 2014 to boost the country’s sport economy to 5 trillion yuan ($759 billion) by 2025, a fifteenfold surge in just over a decade. Global investors poured over 20 billion yuan into the market last year, according to a recent report by JD Big Data Academy and Nielsen.

The open water swimming craze was partly triggered by the National Swimming Week launched by China’s top sports governing body, the General Administration of Sport, in 2014 as part of this mega plan.

Liu Yelin, a 51-year-old who appears to be a dozen years younger, has been swimming in open waters for more than a decade as a way to stay young and keep fit.

“Swimming in open waters is much more common and accessible to everyone than running a marathon,” said Liu. “Even ordinary people can easily join the events with some basic training, once you surmount the fear.”

Liu is a contract blogger on China’s largest microblogging service Sina Weibo. She shares her experiences of bodybuilding and swimming with 144,750 followers.

Mimicking opinion leaders like Liu and Charles Zhang, who aggressively promote their healthy living philosophy on social media, many have taken up sports because it offers bragging rights and the chance to create a “positive public image.”

Sixty percent of those surveyed by Nielsen also said they enjoy posting about their sporting achievements on social media.

“Swimming is part of my daily life. I share photos with my friends as a record of our shared experiences,” said Rachel Lau, 54-year-old Guangzhou housewife. She goes swimming in the Pearl River twice a week in summer with neighbors or friends she has met online.

Doing sports has also become a way to grow your professional or business network.

Although the adrenaline rush from braving choppy currents and resisting eddies has attracted millions to open water swimming in China, lax enforcement of international safety guidelines has raised a red flag over safety. A lack of local rules has compounded the problem.

Jin Bokang, a former national champion in 5,000-meter open water swimming, died of a sudden heart attack during a competition in 2006. The organizers were accused of mismanagement as the escort safety craft stayed as far as 30 meters away from the competitors. Although there were a few lifeguards, there were no frogmen present who could dive deep to rescue Jin on time. His body wasn’t found until the next day.

In Wuhan’s Yangtze River Swimming Festival in July, fewer than half of the competitors were able to complete the event. Twelve of the 15 female swimmers were swept downstream and had to be rescued by lifeguards.

“Many competitors are unfamiliar with the water conditions and it could be dangerous if they encounter strong currents,” said Zhang Jian.

“It’s even tougher for women to swim in cold water compared to men because of differences in their constitutions,” said Liu Yelin, who successfully swam across the Strait of Malacca last year. She saw three competitors being taken to hospital during the crossing.

But despite these risks, “local governments and corporates love to organize swimming events with a distance of 3 to 5 kilometers, usually as publicity gimmicks. But swimming such long distances is generally beyond the capabilities of amateurs,” said Wu Qiyu, deputy chairman of Hainiu Crossing Club, which has helped around three hundred swimming enthusiasts cross the 25-kilometre Qiongzhou Strait between the southern provinces of Guangdong and Hainan.

The 62-year-old retired policeman, who was in a special regiment in charge of catching sea-borne smugglers, founded the club with his friends and former colleagues in 2000. They choose around 50 people from among hundreds of applicants every year and guide them across the strait. Participants are charged 12,000 yuan per person for renting boats, sports gear, coaches and lifeguards.

The club conducts physical fitness tests for each applicant to decide whether they are capable of making this strenuous crossing that takes from 11 to 15 hours. Although most public sporting events require a strict pre-screening process to select participants, media reports show many instances where enforcement was lax, leading to injuries during contests.

Given safety concerns, there are strict standards for weather conditions that limit the club to organizing only one or two tours a month.

“Uncertainty makes it very challenging and thus, a great achievement for those who manage to complete the tour,” said Wu. “We help those brave dreamers see their dream come true.”

“Few clubs are qualified to conduct such cross-swimming programs. Neither governments nor companies like to organize or bring their people to these sort of events, given the stringent safety standards and budget concerns,” he added.

The Business of Sports

As more Chinese are taking to the water, demand for swimwear, goggles, fins and other accessories has surged.

Xingcheng city in the northeastern Liaoning province, which last year produced 40% of all swimwear sold in China and 20% of that sold globally, is experiencing a mini-boom as a result. The over 700 swimwear manufacturers in the city earned a total revenue of 13 billion yuan in 2016, according to the local fiscal body.

Sport-related consumption in China is being driven up by two factors: the proliferation of sports events and the ease of ordering equipment, clothes and other merchandize through a host of online shopping platforms.

The Zhejiang province-based life buoy makers Langzi Sporting said last year they sold over 10 million “Tagalong” floats, a swimming aid used in open water, most of which were ordered online.

Big sporting events have pushed consumers to loosen up their purse strings, the recent study by JD-Nielsen found.

China’s average household expenditure has doubled in the past two years, but spending on sports still represented only one tenth of the global average. People aged between 40 and 60 tend to spend more than other groups on swimming, according to the report.

While celebrity athletes like Charles Zhang usually hire a team to help with training and managing their diet, swimmers like Liu and Lau say they spend less than 500 yuan on swimming. But this excludes the registration fees for competitions and travel costs.

A major issue stifling the growth of China’s open water swimming industry is that most events are crammed into the one week designated as the National Swimming Week.

Chinese National Swimming Week hosts over 80 percent of the total open water activities conducted in a year, most of which last for a few days. In the U.S. on the other hand, there were 142 open water swimming events in 2016, with an average of 30 contests each month from June to September that year, according to governing body U.S. Masters Swimming.

“It is hard to stimulate spending from participants or tourists in a short period. Sustainable benefits can only be produced when you can attract consumers throughout the year, like what happens at the Everest Base Camp,” said Zhang Jian.

“It is more exciting to see people continue to work out with their favorite sport or the one that’s most suitable to their physical condition, than to see them just following a fad,” said Liu, getting ready for her daily swim.