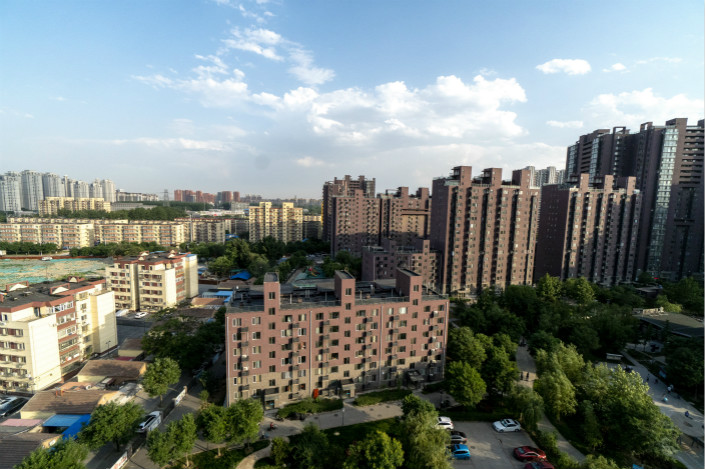 While the average existing home price in Beijing was down 5% in the third quarter compared to the previous quarter, according to the survey, it was still up on an annual basis compared to the same period in 2016. Photo: Visual China

(Beijing) — The average price of an existing home in Beijing fell on a quarterly basis in the third quarter as sales plummeted on the back of government measures to hold down real estate prices, a survey showed.

As of Saturday, sales of existing homes as measured by online contracts totaled 2.06 million units in the third quarter, down 73.7% from the same period a year ago and down 43.7% from the previous quarter. It was the lowest number of sales in the capital in a single quarter since 2015, according to data from the research arm of 5I5J Group.

The average price of existing homes in Beijing fell 5% in the third quarter from the second quarter of this year, after hitting a nine-quarter high in the first quarter.

On an annual basis, the average existing home price in Beijing was up in the third quarter compared to the same period in 2016, according to data from the survey.

Since October, the Beijing municipal government has mapped out a blizzard of administrative measures to contain rapidly growing home prices in the capital, such as raising borrowing costs and minimum down payment requirements for mortgages for second homes.

The government has also required that nonlocal homebuyers provide tax or social security payment records for at least 60 consecutive months and increased scrutiny on “strategic divorces” as ways to squeeze speculation out of the market.

“In the spirit of central government’s directive that ‘homes are for living in, not speculating on,’ the real estate market in Beijing will continue to be under tight control, thus the existing home market in Beijing is likely to remain tepid in the near term,” said Hu Jinghui, vice president of 5I5J Group’s research arm.