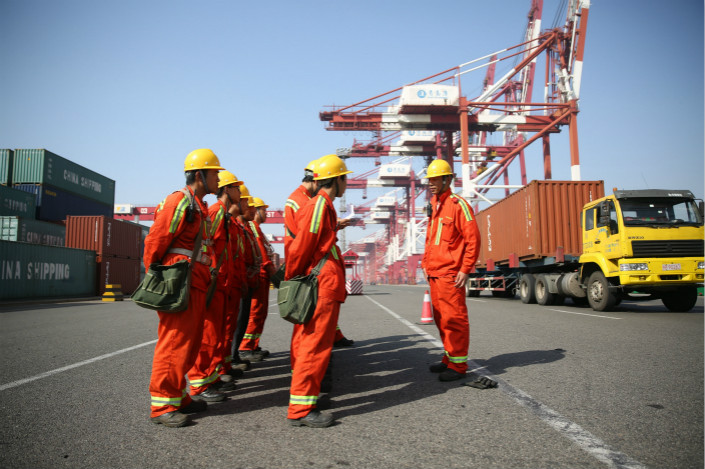 The Hong Kong Monetary Authority has also agreed to provide $1 billion to a World Bank program for infrastructure financing in emerging economies. Above, workers line up at the port of Qingdao in the eastern province of Shandong. Photo: IC

The Hong Kong Monetary Authority (HKMA) is planning to make equity investments in three to five “Belt and Road” infrastructure projects, according to reports by Hong Kong media outlets.

Norman Chan Tak-lam, head of the city’s de facto central bank, was quoted by the Oriental Daily News as saying that the Hong Kong authority has been in talks with state-owned enterprises to seek joint venture opportunities. He did not disclose whether relevant investment decisions can be made by the end of the year.

The Belt and Road initiative, which borrows the idea of ancient Silk Road trade routes, was raised by President Xi Jinping in 2013 and has developed into an all-out national strategy to beef up roads, railways, ports and industrial parks to better link China with Europe and Central Asia by land, and with Africa and Southeast Asia by sea.

The news came days after the HKMA agreed to provide $1 billion to a program run by the World Bank’s International Finance Corp. to support financing projects including those in infrastructure, telecom, manufacturing and agriculture in emerging economies, according to a statement released by the HKMA on Sept. 20.

Chan expects the investment in infrastructure projects to last more than 10 years, and the HKMA prefers to work with long-term investors such as sovereign wealth funds and pension funds.

Currently, 74 countries and international organizations have signed Belt and Road agreements with China, Lu Kang, spokesman of China’s Ministry of Foreign Affairs, said during a media briefing on Monday.