By Bala Ramasamy and Matthew Yeung 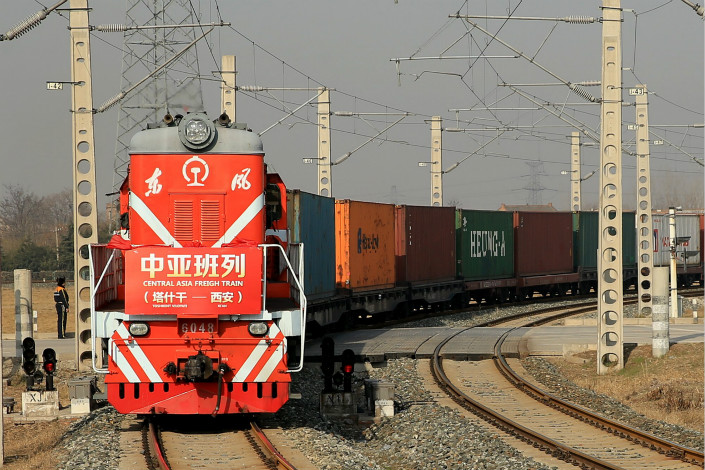 Reducing trade barriers, a principal objective of the Belt and Road initiative, is important, especially given the limited success that international organizations have had in promoting economic growth in developing countries. Above, a freight train carrying high-quality cotton yarn from Central Asia arrives in Xi'an, Shaanxi province, on Feb. 24. Photo: Visual China

Most discussions about China’s massive “Belt and Road” initiative tend to focus on infrastructure projects for connecting an economically vibrant East Asia and developed Europe by land and sea, and in the process encouraging growth and economic development in dozens of countries along the modern Silk Road routes. Our research has shown, however, that equally important are efforts to improve the soft-power infrastructure needed to ensure that trading across the various corridors operates seamlessly.

The Belt and Road initiative has been compared to America’s post-World War II Marshall Plan, whose stated objectives were to “rebuild war-devastated regions, remove trade barriers, modernize industry, make Europe prosperous again, and prevent the spread of communism.” According to China’s National Development and Reform Commission, the objectives of the Belt and Road initiative are to “improve the region’s infrastructure, and put in place a secure and efficient network of land, sea and air passages, lifting their connectivity to a higher level; further enhance trade and investment facilitation; establish a network of free-trade areas that meet high standards; maintain closer economic ties and deepen political trust; enhance cultural exchanges; encourage different cultures to learn from one another and flourish together; and promote mutual understanding, peace and friendship among people of all nations.”

Thus, both plans share two similar objectives for the affected countries: improving infrastructure, and reducing trade barriers. The second objective — reducing trade barriers — has been less discussed by the media. But it is important, especially given the limited success that international organizations (such as the World Trade Organization and International Monetary Fund) have had in promoting economic growth in developing countries, particularly those in Central Asia and South Asia.

The Chinese government authors of the “Vision and Actions” document outlining the Belt and Road initiative’s strategy are well-aware of the challenges. The document points to two approaches to reducing trade barriers: improving trade facilitation by eliminating bottlenecks and promoting free-trade areas. These are the soft infrastructure steps needed to complement the Belt and Road initiative’s harder side, which involves building and upgrading physical infrastructure and expanding digital connectivity.

Both the hard and soft sides of the Belt and Road initiative are expected to have an impact on trade. And both sides are integral to the project’s success. They are mutually supportive in that infrastructure development and free-trade agreements make trade facilitation more meaningful, and vice versa.

However, the hard side of infrastructure development (building roads, bridges and information-communication technology) is financially expensive and risky. It involves more than $1 trillion raised in other countries, especially China, and spent in countries that are known to be politically risky. On the other hand, if Belt and Road-member countries have as an objective enhancing trade — particularly exports — then improving the border administration efficiency seems the most effective way to reach that goal. These measures not only improve exports unilaterally, but they also enhance the effectiveness of the hard infrastructure.

Compared with China, most countries involved in the Belt and Road initiative are small. Parts and components trading often feature prominently in their trade relations. Thus, improving soft infrastructure should be considered a Belt and Road priority. These improvements, however, are still within the policy space of each individual country. Reducing barriers to trade — whether by removing redundant documentation or controlling unsolicited payments to customs officials, or even promoting paperless systems for customs clearance — requires political will in each country. If these measures are introduced, though, physical connectivity can further enhance trade.

Thus, if the Belt and Road initiative is to meet its objective by increasing economic relations among countries in the affected regions, China will have to require that countries along the corridors make significant improvements in their border administration procedures as a pre-condition to investing in the hard infrastructure. The Chinese government could nudge improvements in the soft infrastructure of individual countries by, for instance, promoting regional trade agreements (RTAs) along the various corridors. RTAs could include trade facilitation clauses.

Indeed, recently concluded RTAs have included various features of the soft infrastructure, ranging from customs-related information exchanges involving member countries, to providing single-window systems for facilitating paperless approvals. As long as the features of trade facilitation measures do not discriminate against nonmembers, RTAs could also facilitate greater trade both along the Belt and Road corridor and among participating nations.

China’s membership in RTAs — particularly with the China-Central Asia-West Asia, Bangladesh-China-India-Myanmar, China-Mongolia-Russia and Eurasia corridors — could be a further impetus toward more vibrant RTAs in the region. In this regard, the China-ASEAN FTA (a free-trade agreement tied to the Association of Southeast Asian Nations) is a good model to emulate.

Despite the need for greater investment in hard infrastructure in Asia, which the Asian Development Bank estimated should reach $1.5 trillion annually over the next 30 years, and the emphasis placed by the Belt and Road initiative on building structures that enhance physical connectivity, important as they may be, China and other Belt and Road countries should give equal attention to the soft infrastructure aspect. In that way, the objective of facilitating greater trade will be achieved.

Bala Ramasamy is a professor of economics and an associate dean at the China Europe International Business School. His research focuses on Asian economies, foreign direct investment, corporate social responsibility, and international business strategy. Matthew Yeung is an associate professor of marketing at the Open University of Hong Kong. His research interest focuses on business analytic, corporate social responsibility and diversity.