Opinion: Three Reasons Why China’s Belt and Road Will Succeed

By Bala Ramasamy and Mathew Yeung 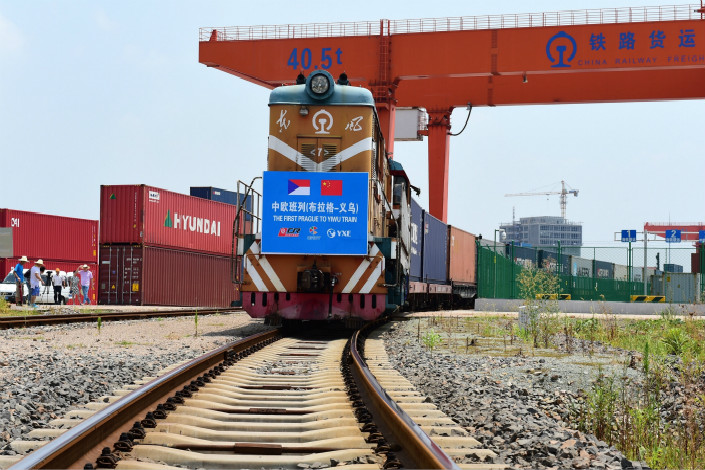 While China has the skills, cash and labor to make the "Belt and Road" initiative a success, it recognizes that it can't achieve this ambitious undertaking alone. Above, the first freight train of the China Railway Express, which connects Prague and Yiwu, Zhejiang province, arrives at the Yiwu West Station on Aug. 4. Photo: IC

There are at least three reasons why it would be unwise to bet against China’s ambitious Belt and Road Initiative (BRI): The Asian giant has the resources, finances and industrial base to see through the project that’s now impacting more than 60 countries and connecting three continents through five routes spanning six economic corridors on land and sea.

China has already proven that it can execute massive infrastructure projects, such as the centuries-old Great Wall. Among its more recent projects is the 20th century Golmud-Lhasa rail route linking Tibet to the eastern coast. Despite tough terrain and high altitudes, Chinese engineers accomplished a nearly impossible task and, in the process, accumulated both expertise and confidence. These skills will help with the BRI.

The BRI will also benefit from overcapacity in China’s large construction materials industry. With the domestic market saturated, projects along the route provide a ready market for Chinese firms that have bought into the BRI ideology, as outlined below.

According to China’s National Development and Reform Commission (NDRC), the BRI’s foundation rests on four principles: openness, inclusivity, market-orientation and mutual benefits. Thus, no country is excluded from this initiative, and countries outside the BRI region are allowed to participate.

However, as the BRI is modeled after the old Silk Road, it mainly plans to connect Asia, Europe and Africa using the land mass of Eurasia, as well as the Indian and the Pacific oceans. The plan is for five routes. The first links China to Europe through Central Asia and Russia. The second links China to the Middle East via Central Asia, Iran and Turkey by land. The third links China with South Asia and Southeast Asia by land.

The fourth and fifth are sea routes. The fourth connects China to Europe through the South China Sea, the Indian Ocean and the Mediterranean Sea with an extension to the eastern coast of Africa, while the fifth takes a detour to the South Pacific Ocean from the South China Sea. These land and sea routes are divided into six economic corridors:

1. The new Eurasia Land Bridge Economic Corridor that connects China and Europe. The backbone of this corridor is an international railway line from Jiangsu province to Rotterdam in the Netherlands. Upon exiting the Xinjiang autonomous region, the railway line cuts through Kazakhstan, Russia, Belarus and Poland, where it joins the European railway network.

4. The China-Indochina Peninsula Economic corridor connects China with five countries in Indochina and extends this to Malaysia, Singapore and Indonesia.

5. The China-Pakistan Economic Corridor connects Kashgar in the Xinjiang region to Gwadar Port in Pakistan.

6. The Bangladesh-China-India-Myanmar Economic corridor involves cooperation among these four countries with common borders.

Although the Hong Kong Trade Development Council lists more than 60 countries that would be affected by the BRI, adhering strictly to the corridors described above, we envisage 21 countries that would have direct involvement, excluding China: Bangladesh, India, Myanmar, Cambodia, Laos, Thailand, Vietnam, Malaysia, Singapore, Indonesia, Pakistan, Mongolia, Russia, Belarus, Kazakhstan, Kyrgyzstan, Tajikistan, Turkmenistan, Uzbekistan, Iran and Turkey. Kazakhstan, Russia and Myanmar are each included in more than one corridor.

With a gross savings rate equal to 50% of national gross domestic product and more than $3 trillion in foreign reserves, China has the financial power to support the BRI. China-led agencies such as the Asian Infrastructure Investment Bank, the New Development Bank, also known as the BRICS Bank, the Silk Road Fund and the China Development Bank will provide the financial backing for BRI projects. In fact, at the May 2017 Belt and Road Forum for International Cooperation in Beijing, President Xi Jinping pledged $113 billion toward the initiative.

China also has a powerful manufacturing sector whose companies are eager to expand abroad. Researchers say some of the more labor-intensive industries in China’s manufacturing sector are ready to relocate to regions with relatively lower wages. This is not unique to China; it is simply a continuation of the process started by Japan that later spread to South Korea, Singapore, Hong Kong and Taipei China during their industrializations in the 1980s.

China has the skills, cash and labor to make the BRI a success. These three factors are enhanced by the country’s recognition that it cannot achieve this mammoth task alone.

In September 2013, six months after being elected president of the People’s Republic of China and during a visit to Central Asia, Xi Jinping suggested the idea of jointly building the new Silk Road Economic Belt. A month later, while visiting Southeast Asia, a complementary 21st Century Maritime Silk Road was introduced. These announcements marked the beginning of the BRI, perhaps China’s most significant international relations initiative in recent times.

When President Xi hosted the Belt and Road Forum in Beijing in May, he was joined by some 28 heads of state and dozens of senior leaders from countries involved in this gigantic project. It appears they also understand that the BRI is bigger than any single country, and that its success depends on all working together.