By Huang Rong and Song Shiqing 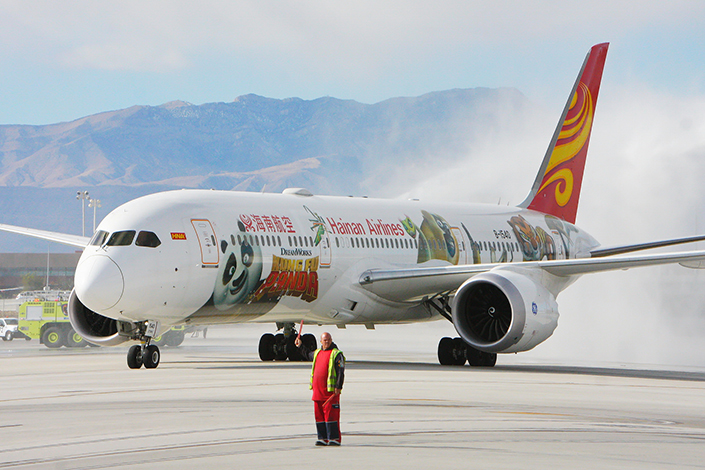 China would no longer limit international routes for many long-range destinations to a single airline if a new regulation being drafted by the country's aviation authority were to take effect. Above, a Hainan Airlines flight from Beijing lands at McCarran International Airport in Las Vegas, Nevada, in December, at the end of the first nonstop flight between the mainland and the U.S. city. Photo: Visual China

Private airlines would be allowed to join state-run competitors in bidding for routes between China and the United States, Australia, Britain, Southeast Asia and selected other parts of the world, according to a regulation drafted by the Civil Aviation Administration of China (CAAC).

If the regulation were to take effect, China would no longer limit international routes for many long-range destinations to a single airline. For example, the change would open to competition the Beijing-to-Los-Angeles route, which has been controlled by state-owned Air China for years.

CAAC restrictions that now cover domestic airline eligibility and flight frequency for international routes would be lifted for many overseas destinations. Authorities let only two airlines serve long-range routes linking some countries that have not granted Chinese airlines commercial aviation rights to enter their airspace.

A long-range route is defined as one that requires flying more than 4,500 kilometers (2,800 miles) one way.

The International Air Transport Association said 95% of China’s long-range international routes last year were served by a single carrier. Among the 10 most-popular long-range routes between China and other countries, only four have more than one carrier.

Although opinions from various parties will be considered before CAAC makes a final decision, China is expected to continue opening more international routes to its airlines, a source who participated in the draft process told Caixin.

The proposed regulation would set standards for CAAC to follow when evaluating competing airlines and deciding which should win a route. Standards would encompass flight volumes, regular destinations, passenger complaint rates and on-time performance.

And because Beijing is now building a second airport, the new regulation would have an effect on airlines seeking international routes between that new facility and abroad.

The State Council, China’s cabinet, has ruled that Air China’s hub must remain at the existing Beijing Capital International Airport. But a number of other domestic airlines will have to move to the new facility when it opens in 2019, including China Eastern Airlines, China Southern Airlines and Beijing Capital Airlines.

Lin said the proposed restriction would hurt airlines that have to move to the new Beijing airport.