Elbowed Aside by Russia, Aramco Opens Wallet to Woo China 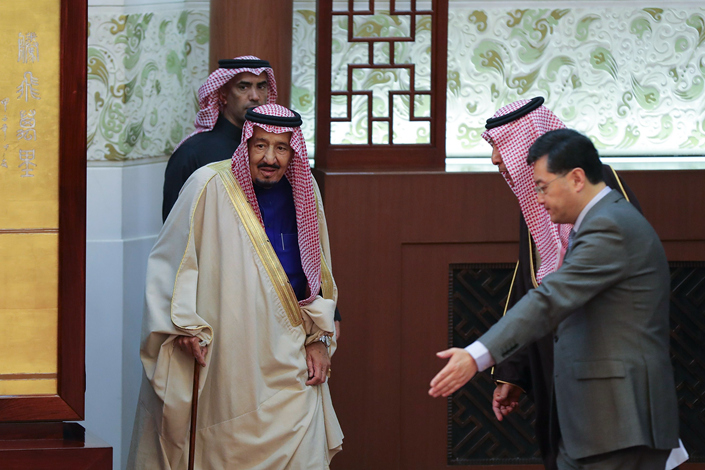 Saudi Aramco, Saudi Arabia's state-owned oil company, is reportedly in talks with China National Petroleum Corp. to resurrect a failed deal from six years ago. Above, Saudi Arabia's King Salman bin Abdul-Aziz Al Saud Salman (center) attends a ceremony at the Great Hall of the People in Beijing on March 16, when Saudi Arabia and China signed 14 deals worth about $65 billion. Photo: IC

The gulf country recently resurrected discussions with China National Petroleum Corp. (CNPC) over a failed deal from six years ago. The country’s state-owned Saudi Arabian Oil Co., known as Saudi Aramco, is reportedly in talks with CNPC to inject cash into a refinery in southwestern China’s Yunnan province. Aramco had the chance to take a stake in multibillion-dollar project when it was established in 2011, but the deal didn’t pan out.

Aramco did not reply to Caixin’s request for comment about the deal, and CNPC declined to comment.

The discussions are just one of several moves that Saudi Arabia has made this year to build on its relationship with China. In March, Saudi Arabia’s King Salman bin Abdul-Aziz Al Saud Salman met with President Xi Jinping in Beijing, signing 14 deals worth about $65 billion. One of the major ones was for a massive refinery and chemical complex in northeastern China, for which Aramco partnered with state-owned defense conglomerate China North Industries Group Corp. (Norinco).

Saudi Arabia’s efforts highlight China’s status as the belle of the ball in the global oil market as Aramco, challenged by falling crude prices and ongoing changes to the oil business, seeks to steal some the country’s immense market back from rival suitor Russia.

“China is a large and fast-growing energy market, and will have more influence as a result. SA (Saudi Aramco) is trying to remain the top dog in the global oil market, and so I’m sure they see this as a strategic move to sustain their dominance,” said Michelle Foss, chief energy economist and program manager at the Bureau of Economic Geology’s Center for Energy Economics at the University of Texas.

Global oil prices have stayed low despite efforts by OPEC and other major oil-producing nations to curtail supply. Saudi Arabia and Iraq, OPEC’s two biggest producers, agreed in May to extend a previous output cut by nine months.

Oil produced from shale deposits in the U.S. is the major reason why the OPEC-led output cuts have failed to spark a rally in global crude prices.

“The shale-oil revolution has most assuredly hurt the Saudi oil business,” said Charles Kolstad, senior fellow at the Stanford Institute for Economic Policy Research and the Precourt Institute for Energy at Stanford University. “With cheap U.S. oil, they now have to face a significantly lower world price.”

U.S. production continues to grow. The U.S. Energy Information Administration on Aug. 14 projected that the output of the Permian Basin in the southwestern U.S., one of the world’s largest oil and gas fields, will rise by 64,000 barrels a day in September, reaching a record of 2.6 million barrels a day.

In a world of lower oil prices, it makes sense for Aramco to hold on to its customers. Russia stole Saudi Arabia’s thunder last year when it overtook the gulf country as China’s largest supplier of crude oil. In 2016, China bought 51 million tons of crude from Saudi Arabia — but 52.5 million tons from Russia, according to BP’s latest world energy review.

This year, Aramco has sought to cultivate its ties with China, especially because the company plans to list part of its assets in what some say will be the biggest initial public offering (IPO) in history.

The Saudis are hoping that Chinese companies and funds will take major stakes in the IPO, The Wall Street Journal reported, citing unnamed sources.

Aramco’s efforts to befriend China began earlier this decade when, in 2011, the company and CNPC initiated the refinery project in Yunnan. The original memorandum of understanding gave Aramco a 39% stake, but the deal never got off the ground. China’s central government at that time had clamped down on new refineries by calling off or suspending projects in the pipeline.

This year, it appears that China has eased off, as evidenced by Aramco’s new refinery deal with Norinco.

Still, the global oil market is changing. Demand will face headwinds for years to come because the entire world is in the middle of an energy-consumption revolution, said Kou Nannan, an analyst of Bloomberg New Energy Finance (BNEF).

By 2029, car buyers in nearly every major economy will find that electric vehicles cost less than those powered by an internal combustion engine, according to BNEF, which forecast that by 2040, 1 of every 2 newly purchased vehicles will be electric.