China Importing More Natural Gas to Keep Up With Demand

By Luo Guoping and Coco Feng 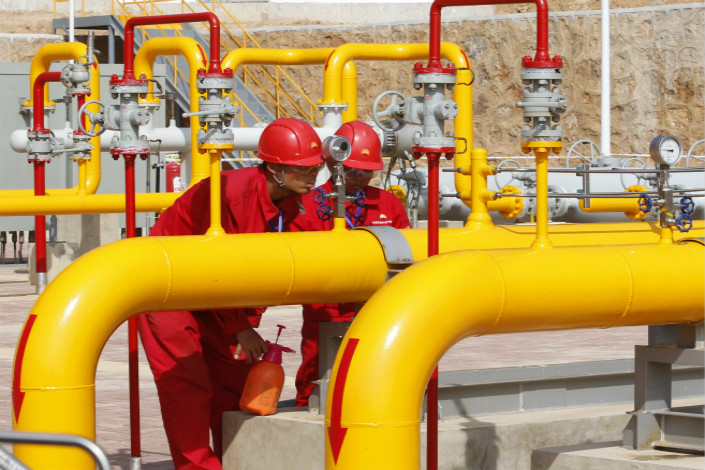 Growth in China's domestic natural gas production couldn’t keep up with that of imports last year, as the latter increased 6.6% while output edged up 1.7%. Above, workers inspect the China-Myanmar oild and gas pipeline in Ruili, Yunnan province, in November 2013. Photo: Visual China

China is on track to become a larger natural gas importer, as the volume from abroad reached 72.1 billion cubic meters (2.55 trillion cubic feet), accounting for a record 35% of total consumption last year, a recent report found.

Growth in domestic natural gas production couldn’t keep up with that of imports, as the latter increased 6.6% last year, while the country’s output edged up 1.7%, according to a report issued Saturday by the National Energy Administration, the Development Research Center of the State Council, and the Strategic Research Center of Oil and Gas Resources of the Ministry of Land and Resources.

Demand for natural gas, which burns cleaner than other fossil fuels, is expected to grow steadily as the government steps up efforts to promote the fuel to tackle severe air pollution.

Still, China is expected to catch up. The country’s natural gas consumption is projected to grow by 8.1% annually from 2015 to 2030, far outpacing the estimated 2.1% annual growth in global demand, according to a report released Wednesday by a think tank under China National Petroleum Corp.

Gas import growth is the highest through liquefied natural gas (LNG) terminals. Of total gas imports in 2016, LNG made up 33.8 billion cubic meters, up 31% from a year earlier, while the amount entering China through pipelines rose 7.6%, according to the report.

The country has worked to broaden channels for both types of imports. In 2016, it imported LNG from the United States for the first time, bringing in 199,000 tons. The Sino-Russian pipeline, which is under construction, is scheduled to start deliveries by the end of 2019.

For now, Australia is China’s top LNG supplier. The country overtook Qatar in 2016 when it exported 11.98 million tons — about half of China’s total LNG imports — to China.

The report suggested natural prices should become more market-driven and called on the government to “regulate” monopolistic distribution channels.