China Expected to Step Up Use of Natural Gas

By Luo Guoping and Fran Wang 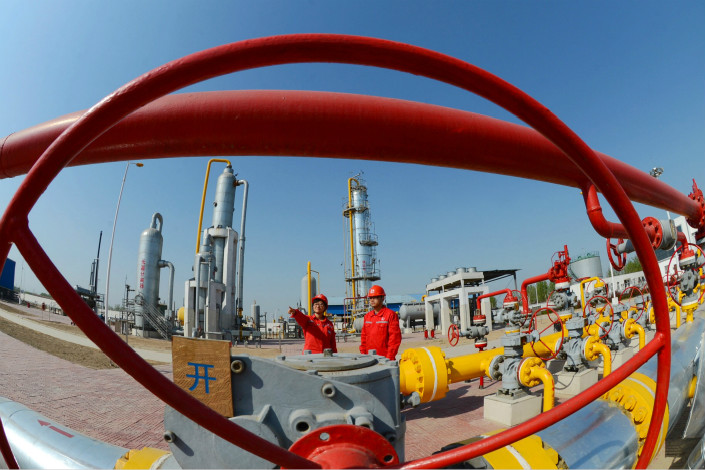 In 2015, natural gas accounted for about 5.9% of China’s energy consumption. The government wants that figure to reach 10% by 2020 and 15% by 2030. Above, workers conduct a safety inspection on a natural gas transmission facility in April 2014 in Henan province. Photo: Virtual China

(Beijing) — China is getting hungry again for natural gas.

The country’s consumption of natural gas is expected to grow by 8.1% annually from 2015 to 2030. That’s considerably higher than what is expected of global demand, which is forecast to grow at 2.1% annually, according to a report from a think tank under China’s top oil producer, China National Petroleum Corp. (CNPC).

China’s demand for the fuel was sluggish in recent years due to weakening economic growth and excess capacity in downstream sectors, such as chemical and power generation. Falling international oil prices also made natural gas less appealing.

Natural gas is much cleaner than coal, which accounts for 60% of China’s energy sources, and oil. Coal is a top contributor to greenhouse gases and air pollution — both of which Beijing has vowed to curb. Carbon emissions from burning natural gas are 59% those of coal and 72% those of oil.

In July 2016, the government began to pressure local officials who had been slow to curb pollution in their areas. As of Tuesday, the central government had sent supervisors to all provincial-level regions to review local authorities’ performance in fighting pollution. The assessment results will be used as a key consideration in determining whether officials are promoted.

“If the strength of environment-protection policies is maintained, there is no big problem reaching the annual average growth rate of 8.1%” for natural gas consumption, Duan said.

However, she also pointed out uncertainties, such as the construction of infrastructure facilities and potential increases in the price of natural gas, may weigh on the use of the energy source.

The CNPC think tank predicts China’s demand for coal will fall to 2.58 billion tons by 2050 — 67.5% of its consumption in 2015. It also projects the country’s oil consumption will decline after peaking at 690 million tons in 2030, which by then will represent 14% of the world’s total crude oil consumption.