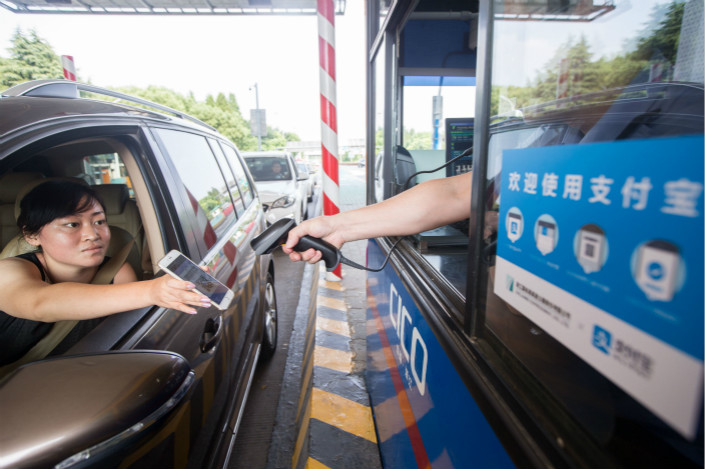 Alipay's May arrival in Hong Kong made the city the sixth offshore market in which the firm has begun offering payment services in the local currency, as the company hopes to replicate its success on the Chinese mainland where it can be used for a wide variety of things, from buying meals to paying highway tolls on the Shanghai-Hangzhou expressway (pictured). Photo: Visual China

Ant Financial Services Group, parent of the popular Alipay online payments service, said it will set up a joint venture with Hong Kong billionaire Li Ka-shing’s CK Hutchison Holdings to deepen its service in the former British colony, in its latest move targeting users outside the Chinese mainland.

The joint venture, which will take over from Alipay’s existing Hong Kong presence, is expected to be set up by the end of 2017 and continue to use the “AlipayHK” brand, according to a joint statement. The deal still requires approval from the Ministry of Commerce.

The venture will allow AlipayHK to target more local customers by using retail brands under CK Hutchison, the ports-to-telecoms conglomerate that owns over 600 stores selling telecommunications services, food, electronics, wine, health and beauty products to over 6.6 million Hong Kong customers, according to the statement.

“By leveraging CK Hutchison’s extensive market presence and combining its commercial experience with Ant Financial’s technological expertise, we will bring great benefits not only to our telecom, retail, and other customers of the group, but also to all businesses in Hong Kong, ” said Canning Fok, group co-managing director of CK Hutchison.

Alipay and rival electronic payment products from Tencent Holdings Ltd. and UnionPay have become hugely popular among Chinese consumers, providing a natural springboard for those services into international markets often visited by Chinese travelers. But those same services have had more difficulty attracting local consumers in markets outside the Chinese mainland due to the presence of existing competition, including global players like MasterCard and Visa.

Ant Financial first entered Hong Kong’s local payments market in May, and its products are now accepted in over 4,000 retail outlets in the city, the company said.

Ant Financial has ramped up overseas expansion this year, making new investments in banks and money-transfer companies in India, Europe, Southeast Asia and the U.S.

The company has also agreed to buy U.S. money-transfer company MoneyGram International Inc., following a brief bidding war earlier this year. But its $1.2 billion bid is still waiting for approval by the Committee of Foreign Investment in the United States, the regulatory body that assesses deals for national-security concerns.