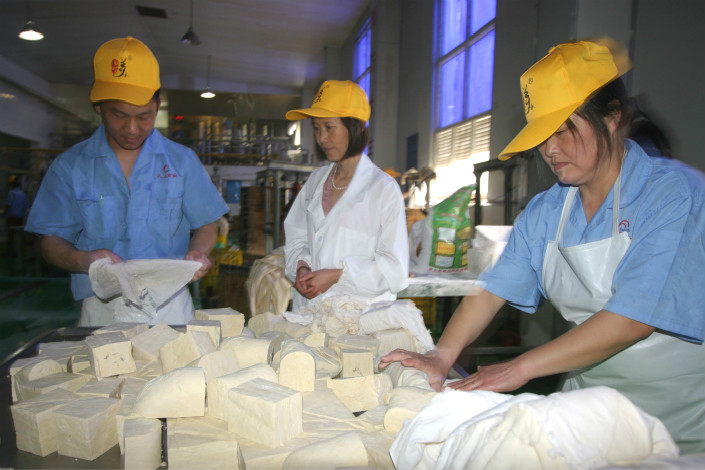 As of the end of June, the outstanding value of loans to small companies in China, similar to this (pictured) tofu factory in the eastern province of Zhejiang, stood at 22.6 trillion yuan, up 59.7% from the end of June 2014. Photo: Visual China

China will offer preferential reserve requirement ratios and re-lending support to commercial banks that provide a certain amount of loans to small companies and agricultural business, as well as secured loans for startups, according to a decision made at a State Council executive meeting chaired by Premier Li Keqiang.

The latest policy is an extension of the central bank’s 2014 program to selectively cut banks’ reserve ratios — the amount of cash that banks must hold in reserve — as an incentive to encourage lending to the agricultural sector and small businesses, which have long been underserved by lenders. China’s monetary authority has been seeking to influence the market through more targeted moves rather than using across-the-board adjustments in interest rates and reserve requirement ratios.

Under this policy, made Wednesday, commercial lenders will be eligible for a lower reserve requirement ratio (RRR) or re-lending support if their total or increase of loans granted to small and micro companies, agriculture businesses or secured loans for startups reaches a certain standard. However, each small and micro company should have less than 5 million yuan ($750,000) in lines of credit, according to a statement out of the meeting that was published on the State Council’s website.

The central bank implemented multiple RRR cuts for selected banks to provide funding for specific economic sectors between April 2014 and February. The outstanding value of loans offered to small and micro companies stood at 22.6 trillion yuan at the end of June, up 59.7% from the end of June 2014, according to financial information provider Wind.

The preferential RRR policy came just a month before the ruling Communist Party holds its 19th Party Congress that reviews the work of the Communist party led by President Xi Jinping over the past five years, and lays out action plans and policy guidelines for the future. Economists from brokerage CITIC Securities said the change demonstrates Beijing’s resolve to give more policy and financial support to smaller businesses, at a time when top policymakers are directing more financing to the real economy.

When the latest targeted RRR cut is implemented, it may indicate the end of a period of tightened monetary policy, Deng Haiqing, chief economist of JZ Securities, said in a research note. But it may not necessarily herald the beginning of loosened monetary policy and “the across-the-board liquidity,” he added.

China’s last cut to the benchmark reserve ratio for qualified banks was in February, when banks whose 2016 lending to the agricultural sector or to small and micro businesses accounted for more than 15% of their annual loans became eligible for a 0.5 percentage point reduction in RRR from the benchmark rate of 16.5%, the central bank said.