By Wang Su and Wu Gang 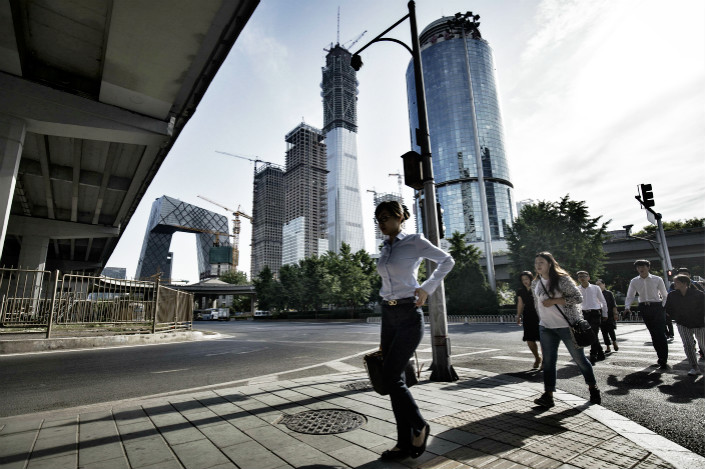 Cai Qi, Beijing's party chief, said the capital is the first of China's cities to pursue "negative" development, in which the density of buildings in central areas will not only stop growing, but fall. Photo: Visual China

Beijing is determined to reduce its population and commercial development in the coming years in order to cure its so-called “big city illness,” the municipal government said on Friday.

As China’s capital has been suffering in recent years from overcrowding, traffic jams, skyrocketing house prices and suffocating smog, the city has become determined to control its growth — and has set ambitious targets.

According to its 2016-2035 urban plan — which has recently been approved by the central government — the city has set three “red lines” for improving residential and commercial property.

Based on its limited amount of water resources, Beijing will ensure its population is capped at 23 million by 2020, and that it will remain there for years to come. The city currently has more than 21.7 million permanent residents.

It is also going to reduce the amount of land used for commercial buildings from 2,921 square kilometers (1,128 square miles) in 2015 to 2,760 square kilometers by 2035, according to a statement on the government’s website.

Thirdly, the city aims to increase its proportion of “ecologically managed” areas to 73% by 2020 and 75% by 2035. The eco-systems of such areas — which will include mountains, forests, rivers and lakes —will be closely monitored.

“The core areas of Beijing, especially those in Dongcheng and Xicheng districts, will further phase out non-capital functions, and make sure to lower their densities in terms of the population, buildings, businesses and tourism,” Cai Qi, Beijing’s party chief, said at a meeting on Thursday aimed at mobilizing officials to commit to the city’s grand plans.

“In terms of 'controlling people,' the general guideline is to make sure the city’s central areas reduce their population," Communist Party-run newspaper Beijing Daily quoted Cai as saying. "The mountainous (outer) areas will keep their population stable."

This means that when industries close or move, populations will relocate along with them “so as to keep a reasonable and orderly flow of people," Cai added.

In terms of controlling construction, Beijing is China’s first city to start “negative” development, Cai said — the city will make sure building density in central areas does not only stop growing, but also that it gradually falls.

The city will also control the number and location of buildings taller than 100 meters, People’s Daily reported.

Beijing will encourage major hospitals to move some of their facilities to the city outskirts. Universities will be forbidden from expanding their land area, and many manufacturing enterprises will also be relocated.