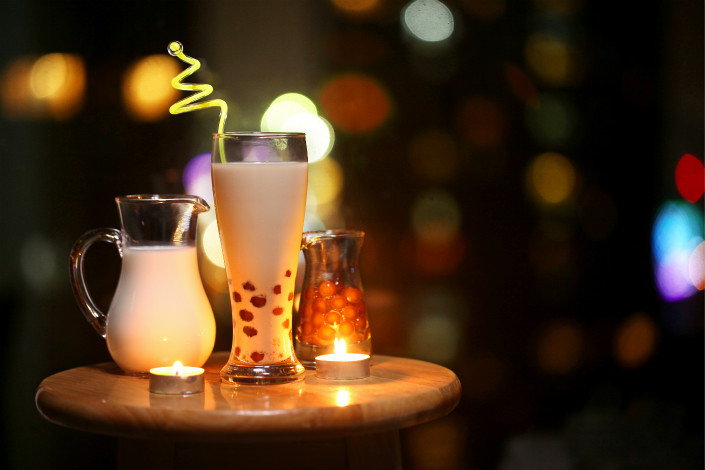 Creamy, sweet, flavored tea with chewy black tapioca pearls bobbing at the bottom of a tall cup — that sums up a classic cup of bubble tea. Photo: Visual China

While economists fret over China’s debt bubble, venture capitalists are pouring money into another kind of bubbly business that has thrived here for over a decade.

The country’s unquenchable thirst for bubble tea has withstood multiple food safety scandals and attracted millions of yuan in investment since mid-2016 after the latest “cheese tea craze” gripped the nation of tea lovers.

Creamy, sweet, flavored tea with chewy black tapioca pearls bobbing at the bottom of a tall cup — that sums up a classic cup of bubble tea. It’s drunk through an extra thick straw with a spoon-shaped tip that helps to scoop up the balls made with cassava root or sweet potato flour. But this simple recipe has been turned on its head over the years, with layers of fresh fruit or custard pudding added to provide a richer taste.

“It’s a mouthful of tea and chewiness all at once. And unlike fresh tea or coffee, bubble tea is both a drink and a snack,” said Gao Junya, a high school student who had skipped her afternoon classes to line up in front of a Hey Tea outlet in Taikoo Li Sanlitun, an upscale mall in Beijing’s popular Sanlitun shopping area.

“I’ve been waiting for over an hour,” Gao said.

The winding line in front of the shop at about 1 p.m. on Friday would have stretched for over a kilometer (three-fifths of a mile) if straightened.

“There’s a general misconception that the chewy tapioca pearls are the bubbles — but they’re not. They’re just the pearls!” a tea-maker at Hey Tea said. “We shake the drink once it’s made to produce actual bubbles to make it frothy. We used to do it in a cocktail shaker, but now there is a mechanized arm to shake the cups,” said the employee, who declined to give her name.

Gao has been waiting patiently for a cup of “milked-capped tea,” a cup of tea with a thick layer of salty cream added on top. It’s the latest fad to grip China’s bubble tea aficionados, with thousands sharing selfies with a glass that costs about 30 yuan ($4.50). You can even hire someone to stand in line for you for 10 yuan per hour through e-commerce site Taobao.

Viral marketing, recipe innovations and a push to create modern teahouses that have become hangout spots for millennials has got China’s urbanites chugging bubble tea despite a July warning by the Shanghai government consumer watchdog that some brands were spiking a cup of tea with the caffeine equivalent of eight cans of Red Bull. And venture capitalists are taking note of this bubble tea boom, which has remained solid for nearly a decade and shows no signs of bursting anytime soon.

“Young people are willing to try new things, they prefer cold drinks and fresh tastes, and we’ve tried to cater to this spirit,” said Nie Yunchen, the founder of Hey Tea. The company, which started off in a 30-square-meter (323-square-foot) shop in Guangdong in 2012, attracted 100 million yuan in financing from IDG Capital in 2016. Hey Tea now sells 2,000 to 3,000 cups of tea each day in Beijing at its 100-square-meter outlet in Sanlitun and a 200-square-meter shop in Chaoyang’s popular Joy City shopping mall. “We want to create experiences that will make consumers feel amazed,” Nie said.

Peng Xin and Zhao Lin, the couple who founded the company in November 2015, have opened 26 stores — each over 200 square meters in size — in the southern tech hub of Shenzhen.

Other brands, like Yi Dian Dian, have created their own recipes, including “ice cream red tea” and “caramel red tea latte” to stay ahead of the competition in an industry with low entry barriers.

Recently, bubble tea makers have merged with bookstores, popular clothing brands and even restaurant chains in search of new clients.

It all started when a marketing executive in Taiwan poured the tapioca balls from her pudding into a tall glass of iced Assam tea in the 1980s. But it took another two decades before bubble tea became a household name on the mainland.

Over the past two decades, bubble tea mania has also swept across Southeast Asia, Britain and coastal cities in the U.S., and it’s slowly seeping into the rest of the world. Coco has 32 outlets in New York, while Hello Lemon has expanded to Boston, Los Angeles and Toronto.

“Bubble tea has spread like wildfire on the mainland owing to a franchise model with low overheads, recipes that are easy to replicate, and a population that still prefers tea over coffee,” according to a recent report on the bubble tea industry by U.S. consultancy Orbis Research.

“It costs about 400,000 yuan in initial funding excluding rent to open an Yi Dian Dian outlet,” said a spokesperson from Qudaosujian, a company that helps bubble tea franchisees raise funds. “Big brands like Coco now partner with franchisees that can open multiple stores, and a prospective franchisee would have to pay about 1.5 million yuan on average for the rights to use their brand for half a dozen stores.”

Tempests in a teapot

It’s not just the ability to scale up quickly that has attracted venture capital to the bubble tea industry. Some investors were more interested in how big brands have survived unscathed after a series of food safety scandals in recent years.

The most bruising year for the bubble tea industry in Taiwan and the mainland was 2011. That year, the Taiwan Food and Drug Administration announced that some manufacturers had included additives used when making plastic to increase the chewiness of pearls used in bubble tea and the products could cause hormonal imbalances.

Authorities said more than 40,000 tea shops on the mainland were possibly selling drinks with these contaminated ingredients.

But after a temporary lull, demand picked up again. For example, Gong Cha, a popular tea shop franchise, has opened over 1,500 stores on the mainland since 2011.

The most recent health warning to rattle the industry came in July, when a Shanghai government-backed consumer watch dog tested 51 cups of milk tea from 27 brands in the city, and found some cups contained a meal’s worth of calories or caffeine equivalent to eight cans of Red Bull.