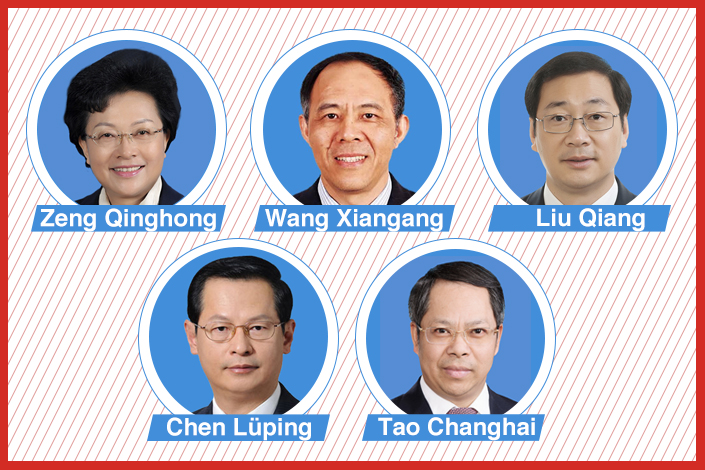 Five senior Chongqing party officials were conspicuously absent from the list of attendees for the upcoming 19th National Congress of the Communist Party.

(Beijing) — In a rare move, five senior Chinese Communist Party officials in Chongqing who were earlier elected to represent the municipality at the upcoming National Party Congress have been excluded from the final list of attendees.

The full list of the 2,287 delegates for the Congress, held once every five years, and which opens in Beijing on Oct. 18, was released Friday.

The five prominent figures from the southwestern municipality were conspicuously absent from the list of attendees for the 19th National Congress of the Communist Party, where a reshuffle of top party officials is expected. A total of 13 Chongqing officials who had been elected were excluded from the list.

Notably, all five of the top officials were standing members of Chongqing’s Party Committee, including Zeng Qinghong, who oversaw personnel affairs at the municipal Party Committee, and Liu Qiang, who is in charge of the police and judicial departments in the city and is also a Chongqing vice mayor.

The other three are Wang Xiangang, head of the secretariat of the Chongqing Party Committee; Chen Lüping, also a vice mayor; and Tao Changhai, who heads liaisons with overseas Chinese groups.

The Communist Party’s Central Committee did not offer an explanation for the omissions, but such moves are rare in political proceedings within the party, analysts said.

Chongqing — a provincial-level municipality with 64 million permanent residents — has been at the center of several political storms over the years.

Chongqing’s former party chief, Sun Zhengcai, was expelled from the party and public office over a string of violations of party disciplines and alleged irregularities, such as bribery, influence pedaling and sex-for-promotion deals, according to a government report released Friday.

Bo Xilai, the city’s high-profile former party secretary, was sentenced to life in prison in late September 2013 for embezzlement, bribery and abuse of power.

Zeng, 55, was replaced as head of Chongqing’s Organization Department by Hu Wenrong, an official transferred from the eastern province of Shandong, according to Chongqing Daily, a paper affiliated with the Municipal Committee of the Communist Party in Chongqing.

The five high-ranking Chongqing party officials were among 43 elected in May to represent the city at the National Party Congress, according to Chongqing Daily.

Sun was also on the original list before he was put under investigation by the party’s top anti-graft body late in July for “serious violation of party disciplines,” a euphemism for corruption.