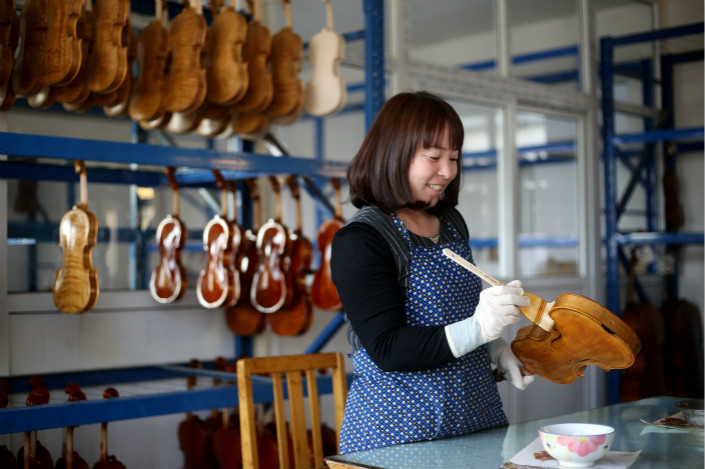 China’s services activity expanded at its weakest rate in almost two years in September, a Caixin survey showed Monday, offering further signs that growth momentum in the world’s second-largest economy may be slowing.

The Caixin China General Services Business Activity Index declined to 50.6 last month from 52.7 in August, the worst reading since December 2015, although it remains above the 50 mark that divides expansion from contraction. The drop follows a decline in the September Caixin China General Manufacturing Purchasing Managers’ Index (PMI) to 51.0 from 51.6 in August, the lowest reading since June.

The Caixin China Composite Output Index, which covers manufacturing and services companies, fell to 51.4 last month from 52.4 in August, also a three-month low.

“The expansion in both manufacturing and services cooled in September, suggesting downward pressure on economic growth may re-emerge in the fourth quarter,” Zhong Zhengsheng, director of macroeconomic analysis at CEBM Group, a subsidiary of Caixin Insight Group, said in a statement.

China’s economic growth as measured by gross domestic product (GDP) was 6.9% in the first six months of this year, exceeding the government’s annual expansion target of around 6.5%. But many analysts expect the pace to moderate in the fourth quarter and in 2018 due to a cooling property market, weaker expansion in infrastructure investment and the government’s campaign to rein in financial risks.

The International Monetary Fund has forecast GDP growth will slow in the second half of the year to give a full-year increase of 6.7%. It sees a further moderation to 6.4% in 2018.

The services sector — which includes finance, real estate services and marketing, transportation, and retailing — has become an increasingly important part of the Chinese economy, reflecting a shift away from traditional heavy-industry manufacturing and exports.

Also known as the tertiary sector, it accounted for 51.6% of the country’s economic output in 2016, up from 50.2% in 2015, and contributed to nearly 60% of growth in the gross domestic product, according to the National Bureau of Statistics (NBS). The services sector is more labor-intensive than manufacturing, and policymakers are counting on it to create more jobs.

The Caixin services PMI, sponsored by Caixin and compiled by international information and data analytics provider IHS Markit Ltd., showed new orders rose more slowly than in August, which contributed to the weaker pace of hiring — payroll numbers expanded only marginally in September.

Even so, the positive reading for employment in the services PMI largely offset the contraction in hiring seen in the manufacturing PMI, leaving the overall employment reading in the Composite Output Index little changed for the second month in a row.

The rise in input prices in the services sector accelerated for the second month in a row, the survey showed, but it has been far milder than in industry, where costs increased at the fastest rate in nine months in September on higher raw material prices, according to the Caixin manufacturing PMI.

Weakening expansion in output and new business dampened overall business confidence in September, with both manufacturers and services providers showing less optimism than the previous month.

Caixin’s services and manufacturing PMIs for September both diverged from the surveys published by the National Bureau of Statistics on Sept. 30. The official manufacturing PMI rose to 52.4 in September, the highest since April 2012, as growth in new orders reached its highest level in more than five years. The official non-manufacturing PMI, which covers the services industry and the construction sector, rose to 55.4 in September, the highest reading since May 2014, on strong growth in building activity as the industry enters its busy season.