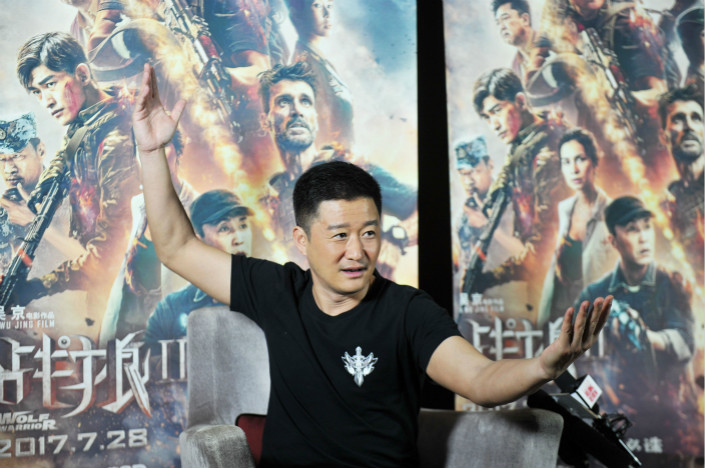 China's selection of the action flick "Wolf Warrior 2" as the country's choice for Oscar nominee as best foreign film has puzzled many Chinese, while others are lauding the unconventional move. Above, Wu Jing, "Wolf Warrior 2" director and lead actor, is interviewed on Aug. 17. Photo: Visual China

After slaying the China box office, the action-packed, nationalistic film “Wolf Warrior 2” is setting its sights on Hollywood.

Beijing’s selection of the blockbuster as its choice for nominee as best foreign film at next year’s Oscars surprised many Chinese, as it’s not the kind of artistic, thoughtful film most countries typically nominate. The Academy of Motion Picture Arts and Sciences revealed late last week that the “Wolf Warrior” sequel was among the films submitted by 92 countries and regions as nominees in the category.

Its action-flick name contrasted with more-thought-provoking titles from the other countries and regions, and immediately triggered widespread discussion on China’s lively social media. Some supported the choice, saying it represented China’s decision of what it should be showing to the world. But most were more perplexed, saying the film that has smashed Chinese box office records wouldn’t stand a chance against more-traditional art-house fare from other countries.

“It really won’t win. But sending it out will scare some of those foreigners, telling them that they will be punished, even though it’s a way off,” said one user named Xinyec on Weibo, the Chinese equivalent of Twitter. That mix was representative of broader sentiment, which blended pride at the film’s huge success with skepticism over its chances at the Oscars.

Unlike other categories where nominees are chosen by the academy, the initial slate of best-foreign-film nominees is initially picked by each participating country and region, reflecting their own sense of how they define the achievement. The academy then narrows the list to five final candidates for its members to vote on for the actual Oscar.

The film, which tells the tale of a fearless former soldier saving fellow Chinese and local African civilians from a band of tyrannical mercenaries, is China’s best-performing film of all time with a take of 5.68 billion yuan ($857 million) to date, according to film tracking site Maoyan. That figure alone is enough to make the film the fifth biggest-earning movie in the world this year, behind only the latest installments of the “Despicable Me,” “Fast and Furious” and “Spider-Man” franchises, as well as Disney’s latest incarnation of “Beauty and the Beast,” according to U.S. film tracking site Box Office Mojo.

“Wolf Warrior” is also the first non-Hollywood release ever in the top 100 all-time highest-grossing films worldwide, currently at 55. Users on China’s popular Douban film rating site gave it 7.4 stars out of 10.

Despite such commercial success, such blockbusters are rarely fodder for the more-uppity Oscars, and action films are even rarer. That led to a broader feeling of puzzlement among the many Chinese who commented on Beijing’s choice.

“Our leaders must be having a brain freeze,” remarked one Weibo user named Catherine Street Wine Distilling Dog. “This movie only got rated a 6 out of 10, though maybe it gets a few extra points because it’s domestic and fast-paced. It should be enough that we can get some enjoyment from it. But to make this our pick for best foreign film … this just seems like a dead end.”

Others voiced similar doubts, praising the movie for its strong box office performance but saying it shouldn’t have been nominated. One named 00cimu00 even said the nomination could be a conspiracy to play to Western egos that want to portray a darker side of China.

But at least a few were more upbeat, saying China should make its selections based on its own criteria, paralleling the nation’s own growing self-confidence on the global stage.

“I want to congratulate ‘Wolf Warrior 2’ in advance for grabbing the golden Oscar statue,” said one Weibo user who calls himself Midsummer Blood. “When the time comes, even the little golden man himself will sigh, stand up and salute, holding up our national flag and saluting our military.”