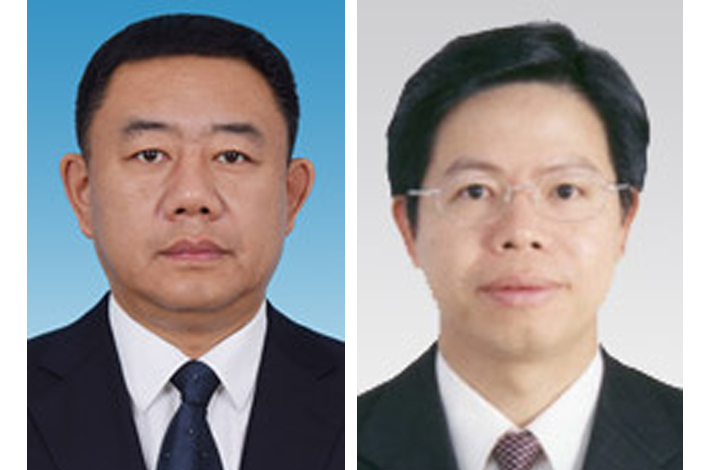 Li Xinran (left) has been a member of both central and regional corruption detection bodies, while Lin Guoyao has spent his entire official career working in government posts in Fujian province.

China has put two vigorous graft-busters in top positions at the country’s banking and insurance regulatory commissions — a strong message that upgraded anti-corruption investigations can be expected throughout China’s financial system.

Meanwhile, market participants are focused on the government’s pending decisions on how to deal with companies suspected of colluding in graft cases. For example, the maze of capital use by Anbang Insurance Group Co. and conglomerate Tomorrow Holdings Group Ltd., are still under special investigation by the central authorities, the source said.

In July at the National Financial Work Conference, President Xi Jinping reiterated the importance of financial stability and the disruptiveness of regulatory corruption.

Now the recent appointment of Li — who has a history of tackling corruption — and Lin — who has been working in government bodies in Fujian province for his over two-decade-long career — signal that the anti-graft campaign won’t be coming to an end in the near term, even as the key National Party Congress approaches in mid-October.

Li, born in 1972 and one of the former party leaders of Lhasa, the capital city of the Tibet Autonomous Region, has participated in a slew of top-level corruption cases. These include ones involving then-Politburo member and Chongqing party chief Bo Xilai, and his successor Sun Zhengcai, in a new case.

Li was a go-getter in the central discipline commission system, where he worked for more than two decades, sources told Caixin. During Li’s time as the director of the No. 6 Discipline Inspection Office at the central discipline commission from March to November in 2015, Shangguan Yongqing, a former party secretary and president of state-run Shanxi Guoxin Investment Group Co., was detained over bribery and corruption allegations.

After shifting his duties to anti-corruption work in six eastern provinces and a municipal city, including Anhui, Jiangsu, Zhejiang and Shanghai from late 2015 to Sept. 2017, Shanghai's vice mayor, Ai Baojun, and vice governor of Anhui Province Chen Shulong were among several “big tigers” who fell under investigation for "severe disciplinary violations."

Sources from the banking regulatory commission, Li’s new workplace since late September, told Caixin that Li is quite different from his predecessor, the mild-mannered Du Jinfu. Li is known for bold moves that arouse shock and awe.

Lin was born in 1966 and served as an official in the Xiamen city government and the provincial government of Fujian province. His appointment to the insurance watchdog was widely seen as a demonstration of the government’s growing emphasis on tackling regulatory problems in the insurance industry.

Lin took his post even though the new chairman of the insurance regulator has not yet been announced, after the previous chairman, Xiang Junbo, became the subject of an investigation in April.

Lin started as head of discipline inspection at the insurance regulator by calling an internal meeting on Tuesday. He announced the central discipline watchdog’s decision to expel Xiang from the party and office, and reiterated that the insurance regulator should learn from Xiang’s case and clean up his harmful influence to rebuild its reputation.

Lin will be one of the six representatives from the insurance industry to join the National Party Congress, which gets underway on Oct. 18.

Chen is still a member of 18th central discipline commission’s committee, which held its Eighth Plenary Session on Monday to discuss and approve a work report to be submitted to the National Party Congress, according to information garnered by Caixin.