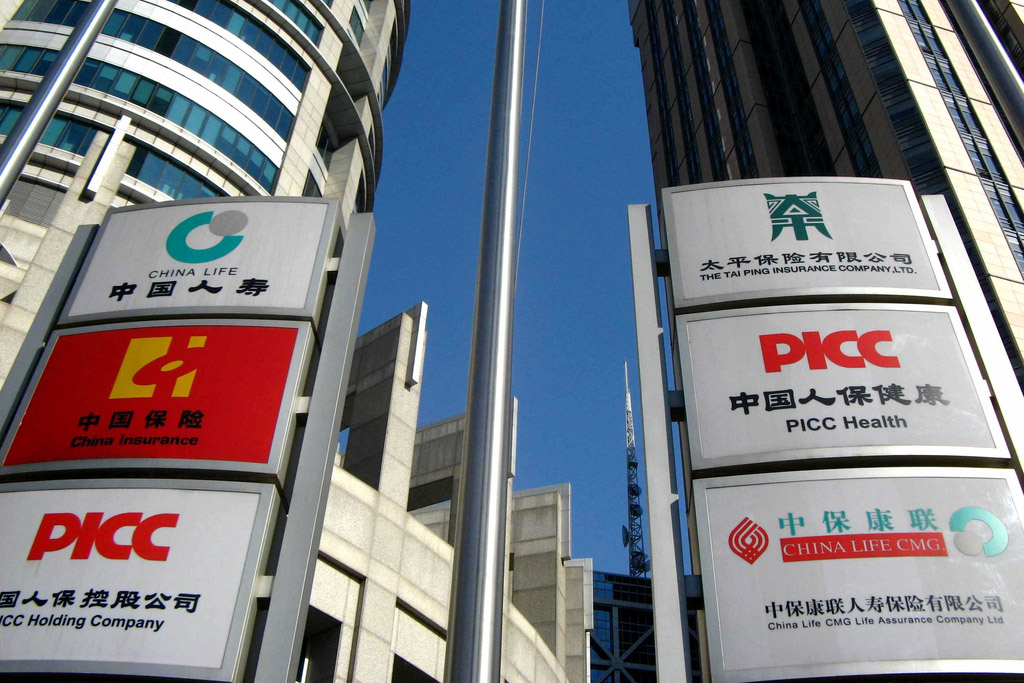 China’s insurance regulator is cleaning up risky business operations after years of lax supervision and the downfall in April of its then chairman, Xiang Junbo. Above: Major insurance companies’ nameplates shown on a Shanghai street. Photo: IC

China’s insurance sector--rattled by the fall of the top industry regulator who pushed forward the industry’s wild expansion--is striving to pull itself together.

The China Insurance Regulatory Commission (CIRC) has issued a series of new rules in recent months to try to root out violations and fix problematic business operations. The rules follow the downfall of Xiang Junbo, the former chairman of the CIRC.

The commission’s revamp of the industry comes after years of booming growth amid lax supervision.

On Sept. 27, the CIRC published its recent industry-assessment results in which several insurers were identified as having violated shareholding rules.

Not a single license for a new insurer has been issued since April, compared to six issued in the first two months. Some newly established insurers have been asked to provide additional materials to explain their business plan and get final clearance to start operation.

A set of new rules that took effect on Oct. 1 is expected to halt sales of some popular insurance policies that offered insurers quick access to funding but proved risky for investors.

Earlier in August, a draft document was released with stricter requirements on insurance companies’ ownership structure--reducing the ceiling of how much a single shareholder can hold to 33% from 51%--as well as their fundraising activities. The draft shareholding rules for insurers are likely to be finalized and implemented by the end of the year. They represent the CIRC’s response to criticism that it has been lax in oversight, allowing big shareholders to gain absolute control over insurance companies and able to channel insurance funds to finance their risky investments.

The regulatory moves tap the brakes on years of high-speed racing by the insurance sector. Industry insiders and experts have applauded the regulator’s efforts but say they are anxious to see the impact.

The major concerns are whether certain companies will continue enjoying special treatment and whether the correction will go too far and contain industry growth, said Xue Xianggang, an insurance analyst.

Yu Wenbo, former deputy chief manager of Sino Life Insurance Co. Ltd., said it’s important to clean up violations that mushroomed during Xiang’s tenure, but the pace of reform in the insurance industry shouldn’t be hindered.

“We believe the CIRC will adopt a slightly conservative approach until early next year, and we are optimistic about the liberalization of the industry,” Yu said.

Xiang, who took over the CIRC chairmanship in 2011, was credited with steering the liberalization of China’s cash-rich but sleepy insurance industry before he fell under graft investigation in April. He had pushed forward reforms that allowed insurers to invest more, both at home and overseas, to drum up returns. And he eased control on insurance licenses to offer easy access to private investors to get into the game.

Since October 2011, the CIRC approved 52 newly established insurers, over half of which were privately funded.

The CIRC’s encouragement of innovation also led to the rise of universal insurance policies, a type of short-term, high-yield product widely issued by small insurers to amass investors’ money by rosy promises of huge returns.

As the CIRC loosened the reins, the insurance sector boomed. Its total assets nearly tripled, thanks to broader investments options for insurers and surging premium revenues. A number of privately owned insurers, such as Anbang Insurance Group, Foresea Life Insurance and Tianan Life Insurance, flourished with generous cash injections from their non-insurance parents and skyrocketing sales of innovative products.

But concerns grew in the industry that regulators gave special treatment to certain newcomers, tolerating reckless investments and improper innovation of insurance policies that placed policyholders under excessive risk.

“Xiang was very close to some insurance bosses and accepted what they lobbied him for,” a source from a private insurer told Caixin.

Xiang had seemingly close relationships with business tycoons, such as with Anbang’s founder Wu Xiaohui and Zhang Jun, chairman of Shenzhen-based Funde Sino Life Insurance Co. And that caught investigators’ attention, sources close to the matter said. Both Wu and Zhang have been the subjects of corruption investigations this year.

In late September, Xiang was expelled from the ruling Communist Party for alleged corruption and turned over to prosecutors to face criminal charges. The party’s top graft buster said in a statement that Xiang had committed serious violations of party rules: These included attending lavish banquets, trading power for sex, profiting from his position, allowing others to profit from his position, and accepting a huge amount of real estate as bribes.

Chen Wenhui, vice chairman of the CIRC, said shortly before Xiang’s expulsion that “special treatment” for some insurers would not be tolerated any longer.

Insurers rattled the market with their aggressive practices to seek control of listed companies at the stock market last year. One notable example was the high-profile battle between Baoneng Group and China Vanke, with the small insurer gunning -- unsuccessfully in the end -- for a controlling stake in Vanke, one of China’s largest real-estate developers.

The ammunition fueling insurers’ corporate raids mainly came from revenues from sales of universal life insurance policies. Beginning in late 2016, the CIRC has clamped down on insurers marketing such risky, short-term policies.

In May, the CIRC issued another document to further crack down insurers’ riskier innovations. The new policy, which was set to be fully implemented in October, is likely to rule out most short-term, investment-focused life insurance products offered by insurers.

The new rule will be a blow to many insurers, because some of their most profitable products will be banned, one insurance company executive said.

Data from Northeast Securities showed that as of early September, the CIRC had listed 147 life-insurance products to face the sales ban, including 12 products offered by Taikang Life Insurance and six by Anbang.

Shanghai-listed China Life will see two of its top three best-sellers in 2016 affected by the new rule, similar to other major insurers like Ping An Life Insurance, China Pacific Life Insurance and New China Life.

Several commercial banks that have helped insurers market their insurance products told Caixin that sales of most of the previously popular high-yield products have been halted, while some the remaining products were not to be available after the week-long National Day holiday, observed from Oct. 1 through Oct. 7.

Xue, the insurance analyst, said some insurers have hoped the regulator would leave them some wiggle room on when they must abide by the ban. But several sources close to the CIRC said the commission is sticking by its date. The commission has recently rejected applications for new products by several insurance companies, citing violations of the new rule, the sources said.

Large insurers with more diverse products aren’t as likely to feel the sting from the new policy. Smaller players that have heavily relied on short-term policy sales won’t fare so well, an insurance company executive said.

The new life insurance rule is the CIRC’s latest attempt to make the insurance industry return to its basics. The commission said in the May document that long-term policies with more protection elements -- such as long-term life insurance, annuity and health insurance -- will be encouraged.

An industry source told Caixin that insurance companies are adjusting their business in light of the new regulations. Some companies decided to extend the term of their existing policies while others are exploring developing new protection-style products.

For example, China Life has started promoting health-insurance products as a new source of revenue. According to a company financial report, China Life’s premiums from health insurance policies increased 21.3% year-on-year in the first half this year, with profits rising 190% to 1.7 billion yuan. Ping An Life reported 213% growth in health insurance premiums during the same period.

The new life insurance rule will hit insurers’ revenue between late 2017 and early 2018, but it will help the industry improve profit structure and prevent liquidity and solvency risks in the long run, Northeast Securities said in a recent report.

Zhou Jin, a financial analyst at PricewaterhouseCoopers China, said Chinese insurers must develop differentiated services and products as part of their future business transformation to win certain niche markets with customized products. Smaller companies should also adopt more advanced technology to improve their marketing and business practices to get a foothold in the market.

“Insurance is not only about cash compensation. It also requires efforts to improve services, such as offering specialized health counseling services to certain group of customers,” Zhou said.