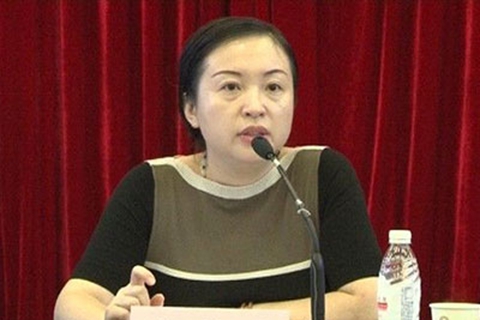 While it is not known exactly how much money Li and her ex-husband made from their illegal activities, sources told Caixin that his bank account contained a "huge amount of bribes."

A Chinese court has sentenced a former senior official at the securities regulator to life imprisonment for corruption and confiscated all her assets, the harshest punishment for graft ever handed to an official at the watchdog, sources said.

Li Zhiling was fired from her role as the head of a high-profile division that reviews corporate refinancing plans in June 2015, after an investigation launched in 2014 by the Communist Party's graft-busting Central Commission for Discipline Inspection (CCDI).

The China Securities Regulatory Commission (CSRC) said Li abused her position and violated internal rules, as she failed to stop her ex-husband from trading stocks. The regulator’s rules say CSRC employees and their relatives must not directly or indirectly trade or own stocks to avoid a conflict of interest. However it is unclear whether she was married to the man at the time he allegedly traded stocks illegally, because Li said that she was divorced in a form submitted to the CCDI in 2014.

Li was given such a harsh verdict partly because she was “ill-mannered and refused to answer questions” during the investigation, people familiar with the situation said. The amount of money involved and the social impact of bribery were also critical factors in the sentence, a lawyer said.

Her ex-husband has been given 15 years behind bars on corruption charges, sources added.

Another source told Caixin that Li was offered the option of simply resigning from her position shortly after the CCDI probe started in 2014, but she declined.

It is not known how much cash Li and her ex-husband amassed from trading stocks during Li’s tenure at the CSRC. But sources told Caixin that a “huge amount of bribes” were found in the ex-husband’s bank account.

Before Li’s fall, she oversaw one of the CSRC’s three most powerful units — the other two being new-share issuance and corporate restructuring.

Some investment bankers who worked closely with Li told Caixin that her style was “intimidating” and opaque. Some of them added that Li’s judgment was at times subjective and inconsistent, which had a negative impact on the industry’s development.

Li also seldom engaged in social activities and went straight home after work most of the time, sources said.

Li’s ex-husband was in the antique business and her family was affluent, sources said.

Li joined the CSRC in 1999, after receiving a doctoral degree in finance at Renmin University of China. She published academic papers with renowned scholars Wu Xiaoqiu and Liu Hongru in 1998 and 1999, respectively. When she oversaw the CSRC’s securities issuance unit, Li was involved in the training of initial public offering sponsors.