By Wang Luyao and Mo Yelin 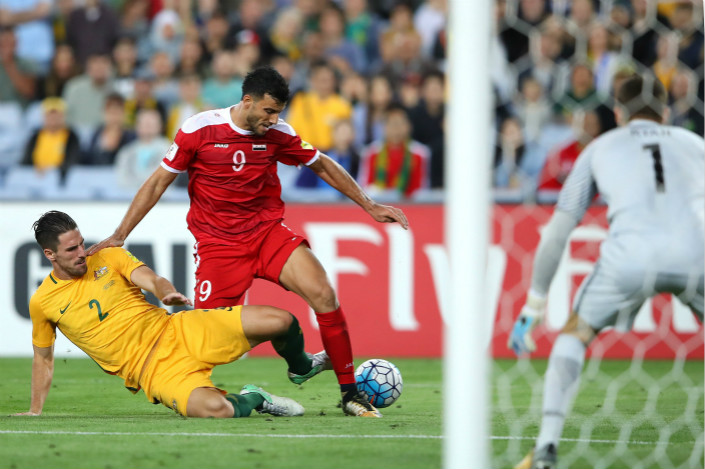 A sponsorship deal involving a subsidiary of Wuhan DDMC Culture Co. Ltd., which will be the sole agent responsible for finding third-tier Asia sponsors for the World Cup, is the latest in a series of FIFA collaborations with Chinese partners. Above, Milos Degenek of Australia (left) tackles Omar Al Soma of Syria during a 2018 FIFA World Cup Asian Playoff match at ANZ Stadium on Oct. 10 in Sydney. Photo: Visual China

A Chinese sports and entertainment firm has won the rights to be the exclusive agent for new Asia sponsorships of soccer association FIFA at the 2018 World Cup.

Desports (Hong Kong), a wholly owned subsidiary of Wuhan DDMC Culture Co. Ltd. (DDMC), said Tuesday it had signed an agreement with the global soccer body and will be the sole agent responsible for enlisting so-called third-tier sponsors for the tournament, which will be in Russia.

Desports will have to offer before May a list of potential new bidders, from which three or fewer will be chosen, according to its statement.

FIFA has been engulfed in a series of corruption scandals over the past several years and has struggled to find new sponsors.

The DDMC deal is the latest in a series of FIFA collaborations with Chinese partners. Last year, real estate and media conglomerate Dalian Wanda became the first Chinese company to be a top-tier sponsor for the body. That deal covers the next four World Cups — 2018, 2022, 2026 and 2030.

Given that there already have been three Chinese companies chosen as FIFA sponsors — none of which is affiliated with Desports — it is unclear whether the DDMC project will be attractive to bidders. Additionally, these bidders will fall into the organization’s so-called “tier-three regional partner” category, which could mean that they enjoy fewer sponsorship rights than levels one and two.

However, DDMC insists the bidding plan — to be made public next month — will be appealing. “Most of our targeted companies in Asia are now facing the problem of tight budgets and will be interested in the relatively low sponsor fees to become FIFA’s tier-three partners,” a source familiar with the deal told Caixin.

Shanghai-listed DDMC initially focused on real estate and mining, but moved into the service sector in 2015 with the purchase of CHS Media, a film and television firm based in Zhejiang. DDMC entered the sports industry for the first time with its purchase last year of a Suzhou-based sports and advertising company.