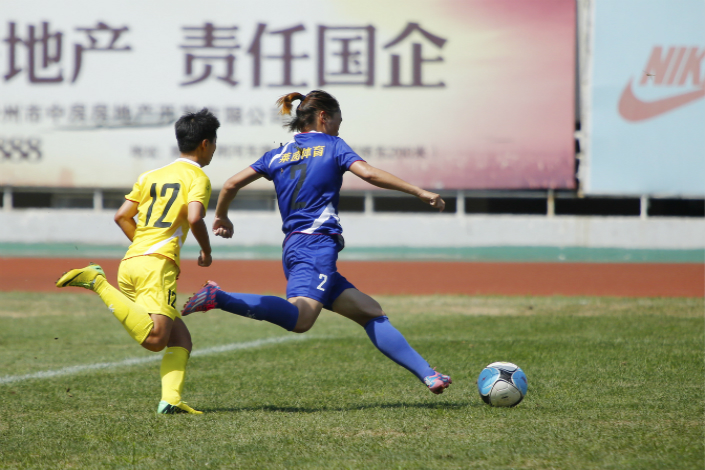 Shares of Lander Sports Development Co. Ltd. fell 2.4% in Shenzhen on Tuesday, the first trading day after the announcement of the company's new $900 million project. Above, a female soccer player (right) playing for Lander fights for the ball against a competitor in August. Photo: IC

Lander Sports Development Co. Ltd. announced plans to build a 6 billion yuan ($900 million) sporting village and athletic complex in the coastal city of Yiwu, adding to its growing network of similar developments to capitalize on China’s growing fondness for sports.

But the company’s recent series of similar projects may cause some investors to worry that Lander is taking on too much debt in its race to transform from a traditional to more niche-oriented property developer, one analyst said. Reflecting those concerns, Lander’s shares fell 2.4% in Shenzhen on Thursday, the first trading day after its announcement of its latest mega-project.

That project will see Lander and the Yiwu government spend 4 billion yuan to develop a sports village, and another 2 billion on a group of associated fitness centers, according to a filing to the Shenzhen Stock Exchange late on Wednesday.

The sports village will consist of four parts: a cluster for sports training companies, manufacturers and other enterprises; a youth training area for sports like soccer and basketball; a recreation and leisure area for sports play and related activities; and a residential area for sports-related medical treatments.

The company has also announced plans for a similar development in the city of Pengzhou in southwest China’s Sichuan province, as well as one in the city of Huangshan in central China’s Anhui province. The five projects entail combined investment of 21 billion yuan, though Lander hasn’t disclosed how the amounts will be split between it and local government partners.

The investments are part of a much larger series by a wide range of Chinese companies and wealthy individuals who are establishing new facilities, buying up sports teams and making other related investments to cater to the nation’s growing appetite for recreation and entertainment. But the rapid spending spree has worried Beijing, which is reportedly trying to slow down the rate of investment, especially by restricting the movement of funds for overseas purchases.

For Lander, the sudden string of such major investments could burden the company with a heavy debt load, said Yan Yuejin, an analyst at real estate services provider E-House.

“The sports industry requires big investment and the profit model isn’t too clear, so you really need to have firm grasp of a stable cash flow,” he said. “Residential components can quickly be sold and recoup their investment, helping to support sports components.”

Lander founder Gao Jisheng, who has strong connections with China’s sporting world, said the concerns are overblown. “Lander has announced many sports projects, so the market thinks there is pressure on our capital,” he said. “Lander is the first to use a model of ‘space + content’, which is the result of three years of research.”