LeSports Looking for Hail Mary Pass to Stay in Game

By Wang Luyao and Wu Gang 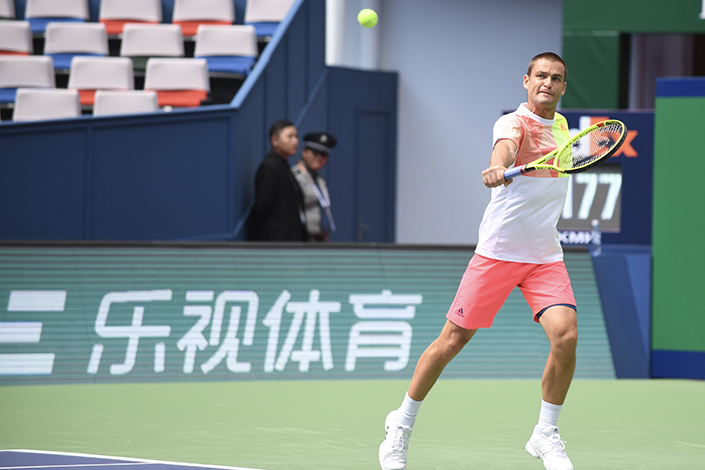 Although LeSports announced in May that it would move some of its operations into Ningbo Ecopark in Zhejiang province within three months, it is unclear if that relocation process has begun. Above, Mikhail Youzhny of Russia plays in front of an advertisement with LeSports' Chinese name, Leshi Tiyu, in Shanghai in October. Photo: IC

The sports arm of financially troubled tech giant LeEco is seeking to be taken over by another company in order to stay afloat, sources told Caixin.

LeSports lost a series of broadcasting rights recently — stemming from a cash crunch with its parent company — including Formula One car racing, as well as soccer matches for the AFC Champions League and the Chinese Super League.

Although LeSports announced in May that it had secured a new round of funding from a state-owned industrial park in Ningbo, in East China’s Zhejiang province, the investor was willing only to put up land for the stake and is unlikely to purchase the company, sources close to LeSports told Caixin.

“Ningbo Ecopark has been conducting due diligence into LeSports, and may come up with an investigation report within two months,” Li Chengliang, a bureau chief in charge of introducing investments to the industrial park, told Caixin on Monday.

“The park will focus on assessing the legal risks in investing in LeSports and consider its current situation. Future cooperation will be based on the results of the investigation.”

Another source inside LeSports told Caixin that the company has been planning to rename its brand on mobile and TV platforms, but did not elaborate whether that entailed the platforms’ proposed severance from LeEco.

LeSports announced on May 26 that it had received a new round of funding from the Ningbo Park, valuing LeSports at 24 billion yuan, or $3.5 billion at the time. The two sides did not disclose how much land the park will transfer to LeSports, nor the stake amount LeSports would cede in return.

Beijing-based LeSports announced in May that it would move some of its operations into the Ningbo park within three months. It is unclear if that relocation process has begun.

Bureau Chief Li said on Monday that it may be a chance for LeSports to find a new business model and see if it can successfully expand offline, building a “sports town” in Ningbo and developing recreational attractions.

LeSports has spent billions of yuan purchasing sports broadcasting rights since 2014. Although it raised 8 billion yuan in funding in April 2016 (about $1.2 billion at the time), it fell into successive debt crises that resulted in premature termination of some its broadcast contracts.

LeSports insiders told Caixin that soon after the company received the 8 billion yuan of second-round funding, LeEco founder Jia Yueting took away 4 billion yuan, including 1 billion yuan he lent LeSports earlier and 3 billion yuan he borrowed from LeSports. But Jia told Caixin in November 2016 that all money he took was repayment of what he had previously lent to LeSports.

Between July 2014 and July 2016, LeSports signed more than 6 billion yuan in contracts for broadcast rights and other investment — but it wound up paying only half of the money because of cash shortages.

Ever since LeEco founder Jia reportedly admitted last year to a liquidity crisis involving tens of billions of yuan, its video-streaming, cell phone, and smart-car manufacturing units have been struggling. The turmoil shows little sign of recovery, even after property giant Sunac China Holdings Ltd. poured in 15 billion yuan ($2.2 billion) in January.