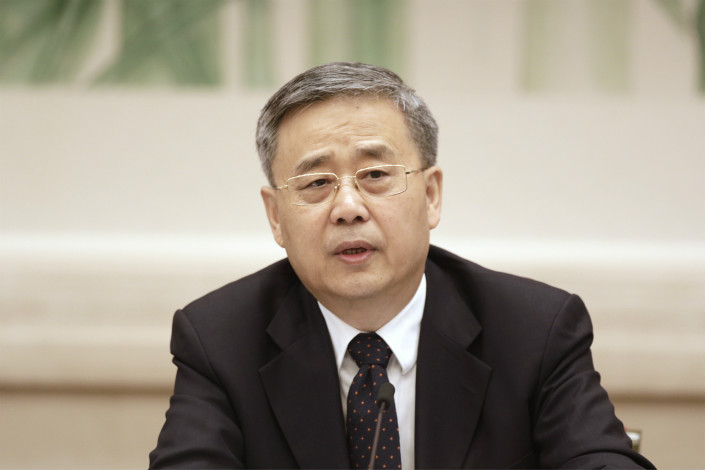 Top banking regulator Guo Shuqing said that the decreasing market share of foreign banks is not a good sign in terms of competition. Photo: Visual China

Tightening oversight of financial institutions and further opening of domestic markets are the priorities for China’s banking regulator going forward.

The China Banking Regulatory Commission (CBRC) will step up supervision of sprawling financial markets, despite initial success in curbing credit-fueled speculative activities, Chairman Guo Shuqing said at a press conference during the 19th National Congress of the Communist Party of China.

Since late March, the CBRC has issued several policy documents with new and tightened regulations that aim to reduce systemic risks, as well as deleveraging and enhancing governance of the banking sector. The CBRC has also conducted on-site checks targeting off-balance-sheet activities, including entrusted loans that take advantage of regulatory loopholes to pursue higher returns from more illiquid investments such as the property market.

The regulator will restrict funding sources for home builders, while curbing off-balance-sheet debts incurred by local governments, said Guo. He said risks associated with interbank lending and borrowing, wealth management products and off-balance-sheet assets are the focuses of regulatory crackdown, because they may trigger widespread financial risks, or fuel bubbles in the property market.

Guo said a new rule drafted by the central bank will target cross-sector risks that may involve banks, brokerages, mutual funds and insurers that are in the asset management business.

Guo also stressed the significance of coordination among different financial regulators under the leadership of the Financial Stability and Development Committee, China’s cabinet-level cross-agency committee that has overseen the entire financial sector since being conceived in July.

The aim of the committee, as central bank Governor Zhou Xiaochuan put it, is to contain risks in four areas: shadow banking, the asset management industry, internet finance companies and private financial conglomerates.

In addition, China will forge ahead with the opening of its banking sector to foreign investors, including increasing the upper limit of shareholding in Chinese financial institutions by foreign banks, said Guo.

Though foreign banks have established 1,016 units in 69 cities around China, said Guo, the market share of foreign banks in China has falling from 2.4% from a decade ago to 1.29% now, which is not a good sign in terms of competition.