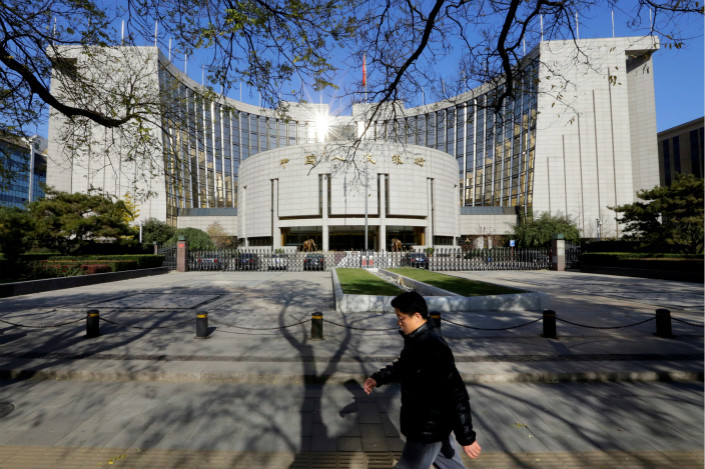 The first task of Financial Stability and Development Committee, whose members include representatives from the People’s Bank of China (pictured) and other financial regulators, will be to draft laws and regulations to clearly state the responsibilities of the central bank and the regulators in combating ballooning financial risks, a source told Caixin. Photo: Visual China

The committee, formally known as the Financial Stability and Development Committee, was created in July to lead and coordinate efforts among the central bank and other financial regulators. The aim, as central bank Governor Zhou Xiaochuan put it, is to contain risks in four areas: shadow banking, the asset management industry, internet finance companies and private financial conglomerates.

The State Commission Office for Public Sector Reform and PBOC’s Financial Stability Bureau are now finalizing a more detailed personnel framework, which will likely be announced after the 19th Party Congress concludes, Caixin has learned.

Once the committee begins meeting, its first task will be to draft laws and regulations to clearly state the responsibilities of the central bank and the regulators in combating ballooning financial risks, a source close to the regulator told Caixin. Such clarification is greatly needed, the source added, because it will help facilitate a quicker response during a crisis.

Another task for the committee will be to give itself a stronger mandate to oversee the financial sector, such as by creating an inspection mechanism for financial institutions, Caixin has learned.

These arrangements are in line with the spirit of the once-every-five-year National Financial Work Conference, from which the cross-agency committee was conceived to restart the nation’s once-fragmented efforts to curb financial risks.

For years, China has been allowing the banking, insurance and securities regulators to separately oversee their own industries, even though the law required a cabinet-level body to coordinate them. However, that cross-regulatory body wasn’t as effective as it was designed to be, and innovative financial products often blur boundaries between industries, such as the online lending business, where growing risks were almost out of reach for any of the regulators.

Another reason to create the stability committee is that current regulations and the division of labor among the watchdogs have not kept up with product innovations and the evolution of the market.

In recent years, a new breed of internet finance and private financial conglomerates has emerged and taken over the market very quickly. Because of the “hybrid” nature of their businesses, they were able to stay out of the regulators’ reach for years while they expanded exponentially.

There were episodes of fraud and corruption. For instance, online lender Ezubo ran a Ponzi scheme that caused investors to lose more than 50 billion yuan ($7.6 billion), and the Fanya Metal Exchange in the southern city if Kunming allegedly sold over 43 billion yuan worth of high-yield investments to some 220,000 investors who later couldn’t cash in the products.

Also, many private players expanded into insurance, and used premium income to finance leveraged buyouts or aggressive acquisitions that were sometimes unrelated to their original business lines. For example, Anbang Insurance Group and Tomorrow Holdings Group built their own property-to-finance empires through unregulated mergers and acquisitions.

“Some large private companies obtained financial-service licenses through acquisitions,” PBOC Governor Zhou said in a recent speech in Washington. “But that didn’t necessarily make them financial service conglomerates in a real sense. There may be connected transactions and other illegal behavior during the process, and we still do not have rules to regulate those cross-industry transactions.”

Lou’s view is echoed by some senior regulators, who said industry watchdogs may not be able to fully understand the underlying businesses, which could morph into a hotbed of illegal and improper activity.

Zhou Xuedong, business management department director of the PBOC, has called for broader cooperation and greater responsibilities for the financial stability committee. Zhou said the committee should also include representatives from the Ministry of Finance, National Development and Reform Commission and even the Ministry of Public Security to cope with fraud or misdeeds that threaten financial stability.

Recently, local financial authorities in Jiangsu province, the city of Shenzhen and some other parts of the country have reportedly been upgrading their financial offices to financial regulatory bureaus.

Market watchers said the move will give more clout to the regulatory work now being handled by higher-level bureaus, such as local branches of the PBOC and other financial regulators.

The upgraded bureaus will primarily tighten the oversight and licensing of internet finance companies at the local level, some say, although it remains to be seen whether local offices are strong enough to execute their new mandate.