By Liu Xiao and Tongjian Dong 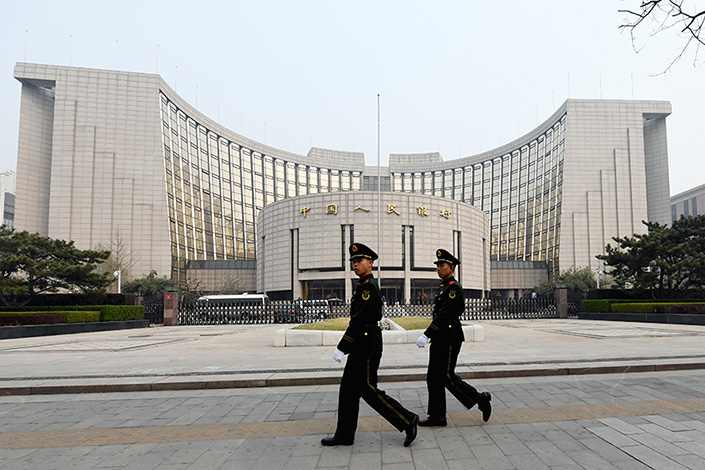 Soldiers walk by the People's Bank of China in Beijing on March 19. Photo: Visual China

The world’s second-largest economy has for years been trying to shift away from easy money in and outside the formal banking system — or “deleveraging,” as the process is technically called —while maintaining sufficient growth.

As China walks a tightrope, another systemic issue emerges: Many of the risks that should be resolved are in a regulatory no-man’s land.

The National Financial Work Conference, a high-level policy meeting held every five years, decided to create a financial stability committee to address this regulatory loophole. The primary objective is to speed up and improve the effectiveness of the deleveraging campaign.

The date of this year’s conference was pushed back twice, fueling speculation on the contentious path for reform.

Here are some key facts, as well as unanswered questions, about this overarching regulatory framework.

1. Why was this year’s conference much-anticipated?

China seemed to have hit a snag with its deleveraging campaign. Moody’s Investors Service previously estimated that China’s shadow-banking assets grew by 21% in 2016 to 64.5 trillion yuan ($9.52 trillion). That is the equivalent of 87% of China’s gross domestic product of that year, or 28.5% of the country’s total banking assets.

Investors, including Moody’s, which recently downgraded China’s credit ratings on its debt management, have been urging a more-concerted and innovative approach to slim down its credit-fueled economy. Explosive growth in off-balance-sheet asset management products and channeling business, as well as runaway growth in online lending, exposed how various regulators were ill-equipped to oversee the market effectively. The financial stability committee created over the weekend is the Chinese government’s response to this new challenge.

2. What do we know about this committee so far?

The People’s Bank of China, the country’s central bank, said Monday it will take on the role as the office of the committee. Lu Lei, director of the central bank’s Financial Stability Bureau, told People’s Daily in an interview published Monday that the committee’s primary task will be to plan and coordinate financial reform and supervision with appropriate regulators.

Lu added that the committee has a mandate from the cabinet to be involved in formulating monetary, fiscal and industrial policies. It will also address supervisory effectiveness and boost accountability.

In response, the China Banking Regulatory Commission said Monday it will cooperate with the central bank in maintaining financial stability and enacting regulations.

The China Insurance Regulatory Commission also said it will ensure the industry “returns to its roots”— providing long-term and stable risk management and protection against uncertainties and losses, improving the efficiency of insurance-asset allocation, and supporting the real economy. The insurance sector has been criticized as one of the culprits in overcharging the financial system by offering complex, off-balance-sheet and high-risk investment products.

3. What more does the market want to know?

The Saturday announcement is a high-level mandate that shows the government is committed to financial stability, curtailing risks and curbing reckless borrowing.

But at the end of the day, the market needs more details on how the policy will be executed. For instance, what does it mean by having local officials held accountable for life for bad decisions on debt management? How exactly will various regulators to be coordinated?

Zhong Zhengsheng, director of macroeconomic analysis at CEBM Group, a subsidiary of Caixin Insight Group, said regulations are set to be tighter. The impact on market participants could be more pronounced if the economy is weak.

4. What is the significance of this initiative?

The conference, chaired by President Xi Jinping himself, has set the tone on financial policy for the next five years. It has sent a very strong signal to the market that the government is beefing up efforts to slim down the supercharged financial system. It could also calm foreign investors like Moody’s, which have been concerned about the country’s growing debt. Zhong from CEBM added that the committee will further crack down on firms that take advantage of regulatory loopholes.

5. What did previous conferences achieve?

The first National Financial Work Conference was held in January 1997 as the Asian financial crisis was unfolding. The meeting led to the creation of four state-owned asset management companies to absorb nearly 1.4 trillion yuan of bad debt from major state-owned banks.

The following conference, in 2002, resulted in the creation of a national banking regulator and allowed state banks to list on overseas exchanges. The 2007 conference led to the creation of China’s first sovereign-wealth fund and pushed for more developments of the onshore bond market. The 2012 conference focused on addressing systemic risks.