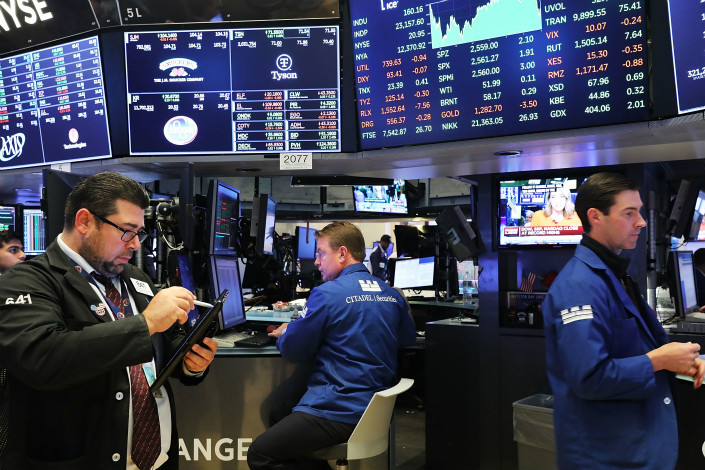 An analyst told Caixin that the strong recent performance of Chinese IPOs on the New York Stock Exchange (pictured) and in Hong Kong may show that fears about China's economy have been "misplaced." Photo: Visual China

An IPO by education services firm Rise Education rose on its trading debut, while two more high-tech offerings announced plans to raise a combined $300 million in what is shaping up as a hot season for new offshore Chinese listings.

The trio of new developments follows last week’s strong performance for Qudian Inc., the largest U.S. offering to date for a new generation of Chinese financial technology (fintech) companies. That listing priced above its original range, raising $900 million, and has moved up 38% from its IPO price since then.

That followed a similarly strong debut for ZhongAn Online Property & Casualty Insurance Co. Ltd., which became the biggest China fintech offering of all time with its listing in Hong Kong last month.

Rise Education, a provider of after-school education services, priced its American Depositary Shares (ADSs) at $14.50, above its originally planned range of $12 to $14, in an indicator of strong demand. It ultimately raised $160 million from the listing, and its shares rallied as much as 23% in their Friday trading debut before finishing up 15% at $16.61.

“I think the recent performance of a few IPOs both big and small is reflective of an improving sentiment toward the China story,” said Ryan Roberts, an analyst at MCM Partners. “Earlier in the year, consensus was that the Chinese economy was about to hit a rough patch. But looking at how the picture has developed since, those fears appear to have been misplaced.”

As Rise’s shares were skyrocketing, Jianpu Technology Inc. and iClick Interactive Asia Group Ltd. made their first public filings for New York IPOs on Friday in the U.S. They came a week after another fintech company, Ppdai Group Inc., announced similar plans to raise up to $350 million.

In the larger of the two new filings, Jianpu, which also goes by the name of Rong360 Inc., said it was aiming to raise up to $200 million in its New York share sale.

The company, which describes itself as “an independent open platform for discovery and recommendation of financial products in China,” said its revenue roughly doubled in the first half of the year to 393.4 million yuan ($60 million). Its net loss roughly halved over the same period to about 49 million yuan.

Meantime, iClick said it planned to raise up to $100 million in a New York IPO being underwritten by Nomura and Credit Suisse, according to its prospectus. The company, which calls itself the “largest independent online marketing technology platform in China,” posted revenue of $55 million in the first half of this year, up 23% from a year earlier. Its loss over that period grew to $22.4 million from a loss of $6.7 million a year earlier.

“We will need to generate increased revenue levels in future periods to become profitable, and, even if we do, we may not be able to improve our profitability as we intend to continue to expend significant funds to grow our marketing and sales operations, develop and enhance our data analytic capabilities, scale our data center infrastructure and services capabilities and expand into new market segments,” the company said.