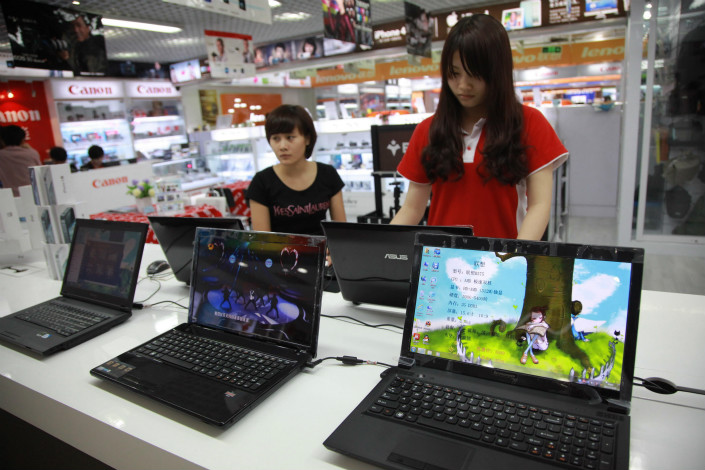 Qudian Inc. is one among a new generation of private fintech companies that use the internet and big data as a major part of their business model for providing financial services like loans to young people to buy computers. Above, a college student shops for a laptop at a mall in Haikou, Hainan province. Photo: Visual China

Qudian priced its American Depositary Shares (ADSs) at $24 apiece, above a previously announced range of $19 to $22, according to a source with direct knowledge of the offering. The price will allow the company to raise $900 million, and as much as just over $1 billion if an overallotment option is exercised, he said, speaking on condition of anonymity.

The stock will start trading on Wednesday in New York.

The strong reception follows a similarly strong performance for ZhongAn Online Property & Casualty Insurance Co. Ltd., which became the biggest China fintech offering of all time with its listing in Hong Kong last month. That offering, involving an online-only insurance company backed by internet giants Alibaba Group Holding Ltd. and Tencent Holdings Ltd., priced at the top of its range, and is currently up nearly 40% from its offer price.

ZhongAn and Qudian are among a new generation of private fintech companies that use the internet and big data as a major part of their business model for providing financial services like loans and insurance. The field has exploded over the last five years as Beijing has opened the financial services sector to private investment, ending a decades-long monopoly by slower-moving state-run companies.

Another fintech company, Ppdai Group Inc., made its first public filing late last week for a New York IPO to raise up to $350 million.  The company would become the largest listing to date for a recently minted field of Chinese peer-to-peer lenders, which take deposits from investors, often through online channels, and lend them to borrowers.