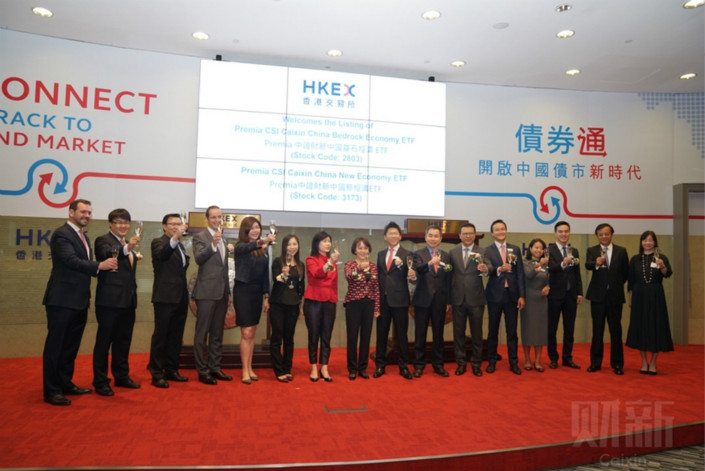 Unlike “pure” beta ETFs that passively follow indexes built on market capitalization and share prices, smart beta ETFs track indexes that allocate assets based on driver factors such as volatility, dividends and other “anomalies” that pure beta strategies do not capture.

Over 95% of all A-share ETFs listed outside the Chinese mainland focus on financial and state-owned enterprises, according to figures provided by Premia Partners, which manages those ETFs.

But “today, about a third of China’s economy is new economy, and the new economy index sometimes has an inverse relationship to the official economic growth indicators,” Hu Shuli, the editor-in-chief of Caixin Media, said at Tuesday’s listing event.

Demographic trends in China are crucial factor drivers in those ETFs. At an afternoon forum, Leon Meng, managing partner of Ascendent Capital Partners, said investors are likely to become more interested in education and other related sectors. Rayliant Global Advisors founder Jason Hsu said at the same forum that, as China’s moderately affluent four-grandparent, two-parent, one-child families age, healthcare, consumption and education will become the focuses of their spending.

But Qin Xiao, former chairman of China Merchants Group, warned at the same forum that many new-economy firms are already overvalued, so in the short term they may not offer returns as attractive as blue chip companies.

Overall “we are optimistic about the A-share market because the more negative factors have changed, including economic growth,” David Lai, a co-chief investment officer at the Premia Partners said.

Growth has exceeded expectations, and the yuan is appreciating while capital outflows have shrunk, Lai added.