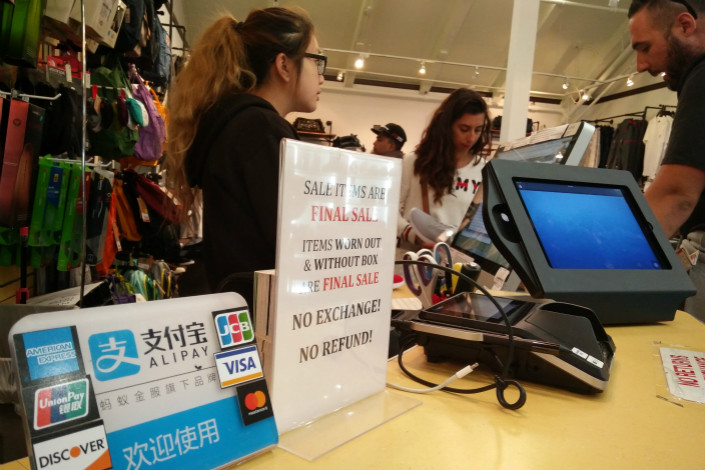 Ant Financial Services Group, which has 54.5% of the mobile payment market in China, has spent the last few months beefing up efforts to expand the reach of its Alipay mobile-payment platform offline. Photo: Visual China

The initiatives include offering up to 1 trillion yuan ($150 billion) in microloans to small merchants over the next three years, as well as fee waivers for small merchants to make cash withdrawals, Ant Financial said.

Ant Financial, China’s largest mobile-payment provider with 54.5% of the market, has spent the last few months beefing up efforts to expand Alipay’s reach offline, as rivals such as Tencent Holdings’ WeChat Pay are catching up quickly.

WeChat Pay has an advantage because the payment app is embedded in the country’s most popular messaging app, WeChat, which has nearly 1 billion active users. Alipay, however, is limited to mostly restaurants and public services. The service had long ignored small merchants like street vendors until competitors began grabbing market share.

Since February, Ant Financial has been promoting its payment-by-scan system for small companies across China — a cashless option that allows smaller merchants to receive payments through a bar code that its customers can scan with their mobile devices.

A business does not have to provide business registration documentation to become an Alipay partner merchant. With nothing more than a printout of the code, small merchants can access financial services such as loans provided by Zhejiang E-commerce Bank Co. Ltd., which Ant Financial is the biggest shareholder of.

Dai Ye, a credit manager at the Zhejiang E-commerce Bank, told Caixin that the lender approves more than 100 million yuan in loans to small business owners each day. Each borrowers receives a credit line of between 10,000 yuan and 20,000 yuan. Interest rates range from 13.8% to 14%.