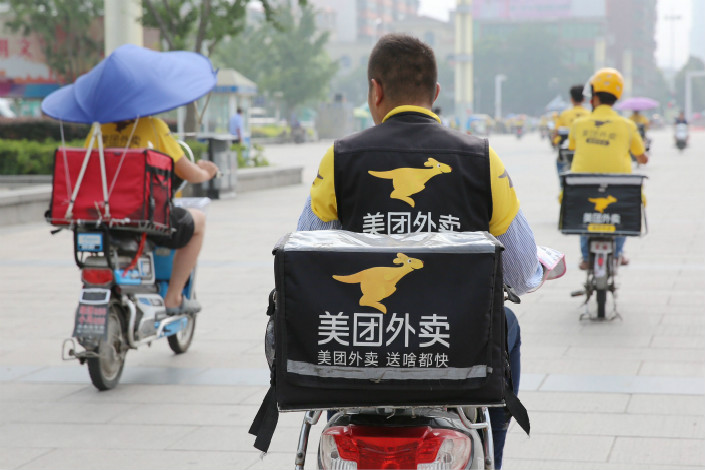 Prior to the recent case of the meal-scoffing deliveryman, a video went viral in February showing Meituan drivers brawling with their Ele.me rivals in a Zhejiang province city. Photo: IC

Disappointed at the skimpy serving of your latest takeout meal delivered fresh to your door? It turns out miserly restaurant owners may not be to blame, but rather the legions of scooter riders who make a living delivering thousands upon thousands of takeout orders to eat-in diners each day.

The latest viral video on China’s internet captured a deliveryman from Meituan, one of the nation’s two major online takeout services, feasting on a patron’s food before delivering it to its final destination.

The images were captured on a video camera inside an elevator, and show the man riding inside the elevator, dressed in his yellow Meituan uniform with its distinctive kangaroo logo. During the ride, he stoops down to untie the plastic bag that contains the food he’s delivering. He helps himself to several mouthfuls, and then appears to spit into the food before sealing up the container and bag and walking out of the elevator to complete the delivery.

Meituan acknowledged that the incident occurred, and said the deliveryman had been fired in accordance with company policy. It added the company had apologized to the customer.

“This incident reminds us: Platform operators need to constantly be on guard when it comes to matters of food safety and delivery sanitation,” the company said. “Meituan will strengthen its guidance for and realization of its discipline policies at its many takeout delivery stations. At the same time, it will work to perfect methods for sealing products to prevent this kind of thing from happening.”

Unlike traditional food delivery services, which are typically operated by individual restaurants, Meituan and rival Ele.me operate third-party online platforms that allow takeout diners to choose from hundreds of independent restaurants in the cities where they live. Occasional complaints have emerged about food quality, and also deliverymen who often drive on sidewalks and park their scooters haphazardly outside residences.

Many of those deliverymen make minimal wages and work long hours, and reports on the elevator incident noted it occurred during a delivery in the middle of the night. Another controversy involving deliverymen from Meituan and Ele.me erupted in February, when a video went viral showing a brawl between workers from the two camps in Zhangpu, a coastal small town in southeast China’s Fujian province.