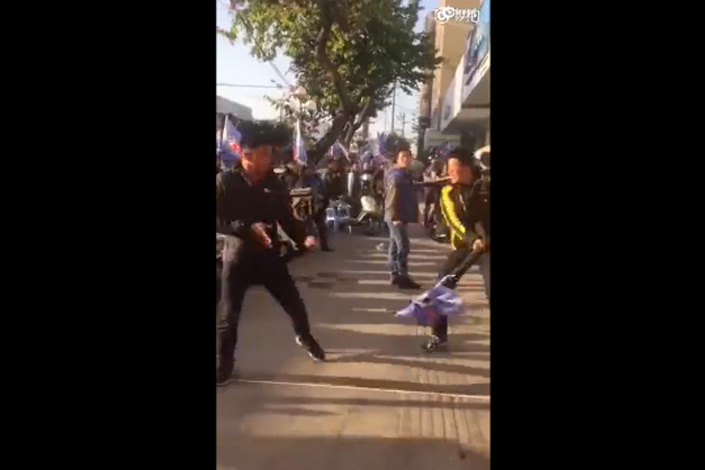 Workers from delivery companies Ele.me and Meituan.com brawl in Zhangpu, Fujian province, in a screen grab from a video filmed on the scene on Feb. 13. The viral video has become emblematic of the intense competition in the food-delivery industry. Photo: Sina.com

(Beijing) — Stunned by the aggressive elbow punches, the kicking, but mostly the whipping of opponents using poles with small delivery-cart flags, millions of Chinese netizens watched a street fight with bated breath on Tuesday, fearing for the safety of their lunches.

The viral video of a fierce scuffle between two groups of takeout deliverymen has become symbolic of how intense turf wars in the sector easily turn violent.

Clad in blue windbreakers with helmets to match, deliverymen from Ele.me, one of China’s leading takeout firms, confronted their counterparts from Meituan.com, sporting black sweatshirts with yellow logos, as the Ele.me workers tried to storm their rivals’ base in Zhangpu, a small town along Fujian province’s coast in southeast China. Meituan.com is part of Meituan-Dianping, China’s largest group buying site.

“Go on and fight! You think this gives you the right to deliver in this territory?!” shouted one brawler in the video that a spectator took on their cellphone.

Such incidents of hand-to-hand combat are not uncommon in China, where armies of takeout deliverymen tear across streets and alleys on scooters day and night, rushing to dispatch noodles and dim sum meals. China’s food delivery market was valued at 142.5 billion yuan ($20.7 billion) in 2015 by consultancy iResearch. It was expected to grow to 181 billion yuan in 2016.

Most drivers working for the big three players in this nascent industry — search giant Baidu Inc.’s delivery arm, known for its red uniforms; Meituan.com, conspicuous in yellow; or Ele.me, dressed in blue — share turf and brush shoulders in street crossings and even elevators.

In addition, their companies vie for exclusive agreements with popular restaurants to entice users from their two competitors.

Consultancy iResearch said that Meituan.com and Ele.me each have a third of the takeout market, while Baidu had about 20%. The remainder was divvied up among smaller players.

According to a statement from Meituan.com, the Feb. 13 clash began when Ele.me deliverymen were allegedly egged on by their manager to storm Meituan.com’s base in Zhangpu to “fight over market turf disputes.” The two sides later “made peace,” Meituan.com said.

“These deliverymen are young and hot-blooded, many not well-educated, and dressed in different uniforms, so it’s easy for them to feel aversion towards their counterparts,” said Liu Peng, a food-delivery-industry observer and founder of takeout quality inspection firm Ganjingme.

“Joining a delivery company is like joining a gang for these young men, and fights are more about being macho than anything real. But deep down, they know they are on the same boat, just earning 4 or 5 kuai (yuan) per order, so the brawls never get serious.”

“You never know if your lunch is going to trigger a war,” a netizen using the alias “Shorttemper” said on their Weibo microblog.

“Now I know why it often takes so long for my food to arrive every day,” joked another.