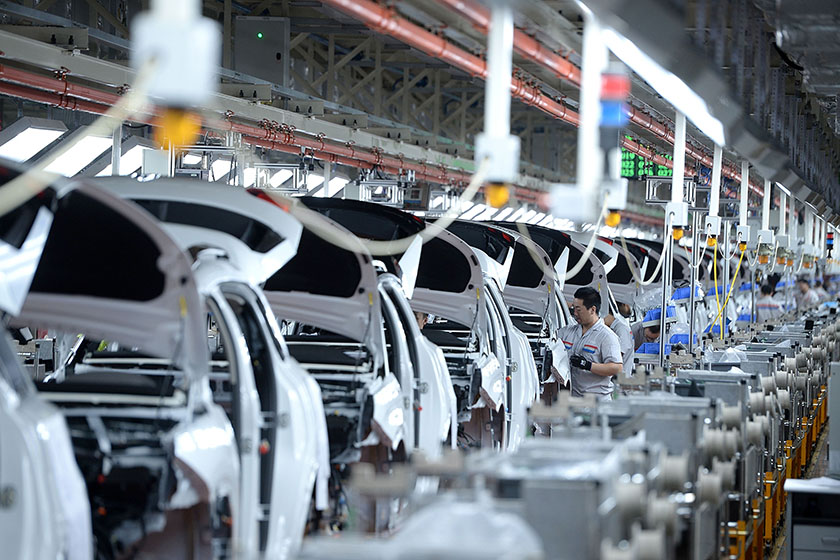 China’s official Manufacturing Purchasing Managers Index fell to 51.6 in October, down from 52.4 the previous month. The October figure was its weakest reading since July, as production slid to its lowest level since January. Photo: Visual China

China’s economy had a softer start to the fourth quarter, with manufacturing activity growing at the slowest pace in three months in October, as the government’s campaign to curb pollution took a toll on industrial output in industries such as coal and steel.

The official Manufacturing Purchasing Managers Index (PMI) fell to 51.6 in October from 52.4 the previous month, the weakest reading since July, a report released by the National Bureau of Statistics (NBS) showed. The production subindex fell to 53.4 from 54.7 in September, the weakest since January. A number above 50 indicates activity expanded, while anything below 50 signals it contracted.

The official nonmanufacturing PMI, which covers both the services and construction industries, declined to 54.3 in October from September’s 55.4 — which was the strongest reading in more than three years.

The latest PMI readings provide “early hints of a post-Party Congress slowdown” in the world’s second largest economy, said Julian Evans-Pritchard, a Singapore-based analyst with research firm Capital Economics, referring to the quinquennial national congress of the ruling Communist Party held earlier this month. The congress saw new party leaders elected and set out a road map for the country’s development through 2050.

“With fiscal support likely to be reduced now that the Party Congress is over and the environmental crackdown set to intensify, we anticipate a further slowdown in the months ahead,” he said in a research note after the data.

NBS analyst Zhao Qinghe attributed the decline in October’s manufacturing PMI to “slowing operations at high energy-consuming and high-polluting industries” due to local government policies to reduce toxic emissions and discharges. “Relevant enterprises adjusted their output schedule to cut or suspend production as some areas strengthened efforts to reduce pollution,” Zhao said in a statement on the bureau’s website.

He said the PMI reading for the high energy-consuming industrial sector fell to 49.2 last month from 51.3 in September, with the industries of nonmetal mineral products, oil processing and coking seeing “sharp drops.” The NBS does not publish a breakdown of the PMI for these industries on a regular basis.

The subindex of export orders fell by 1.2 points in October from the previous month, smaller than a decrease of 1.9 points in overall new orders, which Evans-Pritchard said indicated “softer domestic demand was the main culprit” for the decline in October’s headline manufacturing PMI reading.

The subindexes of input costs and output prices both posted the first drop in five months in October but remained elevated, indicating the continued impact of the government’s ongoing drive to reduce excess capacity in industries such as steel, coal, aluminum and cement, and the pollution crackdown that’s led to temporary factory closures.

China’s economic growth moderated to 6.8% in the third quarter from the 6.9% pace of the first and second quarters. It marked the first deceleration since early 2016, and analysts expect the slowdown to continue as investment growth cools, industrial output is held back by the campaigns to remove excess capacity and cut pollution, and the government maintains curbs on the property market.

The independent Caixin manufacturing PMI will be published on Wednesday and the Caixin China General Services Business Activity Index will be released on Friday.