China to Emphasize Quality Over Speed for Economic Growth 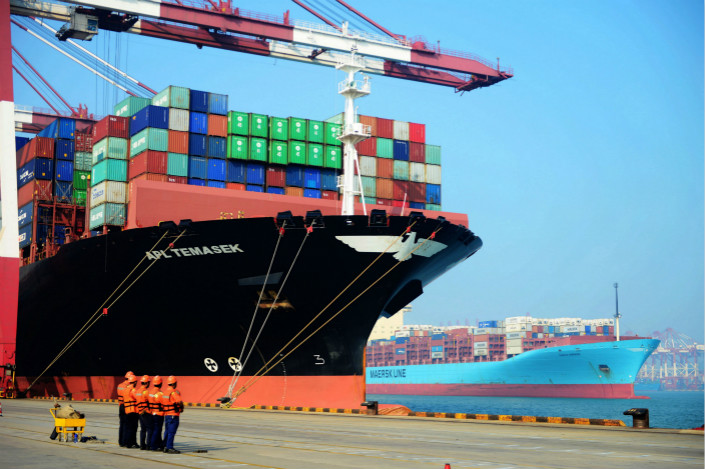 The omission of new gross domestic product growth targets “was meant to better carry out our new development principle,” the vice minister of the Office of the Central Leading Group on Financial and Economic Affairs said. Above, a cargo ship loaded with containers to be shipped abroad berths at the Port of Qingdao in Shandong province on July 13. Photo: IC

President Xi Jinping did not mention a long-term target of domestic gross product (GDP) growth beyond 2020 last week, when he unveiled the road map for the country’s economy through 2050 at the twice-a-decade National Party Congress.

As the second-largest economy after the U.S., China’s official growth targets are always closely watched globally. In previous party congresses, top leaders had announced its goal of doubling China’s GDP and per-capita income by 2020 from 2010.

“China’s economy has transitioned into a stage of high-quality development from the stage of high-speed growth,” Yang Weimin, vice minister of the Office of the Central Leading Group on Financial and Economic Affairs, told reporters.

The omission of new targets “was meant to better carry out our new development principle,” Yang said.

“We must address imbalances and insufficiencies in the economy through (improving) quality, efficiency and (growth) drivers,” he added.

At last week’s congress, Xi said his government will build the nation into a “basically” modernized socialist country by 2035 and a “global leader” in terms of “national strength and international influence” by 2050.

Premier Li Keqiang in March announced China aims to achieve a GDP growth of “around 6.5% or higher if possible in practice”. The goal is set to be reached as cumulative GDP for the first nine months rose by 6.9%.

But the sustainability of growth remains a concern for top leaders, and the government has been pressing ahead with its so-called supply-side reform, which has so far focused on cutting excess industrial capacity such as coal and metals, and deleveraging the economy, especially the financial sector, local governments and state-owned enterprises.