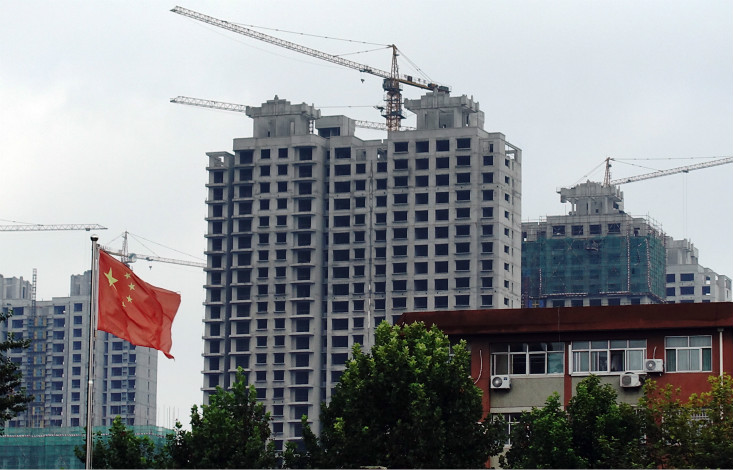 China’s economic expansion moderated in the third quarter, the first time it has done so since early 2016, and analysts expect the slowdown to continue as investment growth cools and the government maintains curbs on the property market.

Gross domestic product (GDP) in the world’s second-largest economy rose by 6.8% year-on-year in the July-September period, the National Bureau of Statistics (NBS) said on Thursday, matching the median estimate in a Bloomberg News survey of economists. Growth edged down from the 6.9% pace seen in the first and second quarters, but still exceeded the government’s full-year target of “around 6.5%.”

Liu Dongliang, a Shenzhen-based analyst with China Merchants Bank, said the third-quarter data showed the economy is on a “gradual slowdown” trajectory, with growth expected to weaken further.

“Controls over local government financing will be increasingly tightened, manufacturing investment is unlikely to improve much … property sales and investment will very likely drop in future, while consumption will possibly remain stable,” he said in a note after the data release.

Some economists expect Beijing to accept slower growth rates in the coming years after President Xi Jinping stopped short of setting a specific long-term target for economic expansion in a speech at the opening of the 19th Party Congress on Wednesday that outlined his vision for the country’s future.

“China’s policymakers are likely to tolerate growth to have another leg down to 5-6% in the next five years, so that they could have bigger room to fix the structural problems and make growth more sustainable,” Larry Hu, an economist with Macquarie Capital Ltd in Hong Kong said in a note. He estimates GDP growth will slow to 6% next year.

UBS AG economist Wang Tao said Xi’s omission in setting a new long-term growth target suggested a “subtle shift of the Party's primary development objective,” although the commitment to doubling 2010 GDP by 2020 was still intact. To achieve that goal, the economy only needs to expand by 6.3% a year over the next three years, she said.

For now, the government looks set to beat the 2017 target set by Premier Li Keqiang in March, with cumulative GDP for the first nine months rising by 6.9%.

Value-added industrial output, which measures production at China’s factories, mines and the utility sector, rose 6.6% in September from a year ago, the highest in three months, NBS figures showed. Although production of electronic equipment such as computers and mobile phones jumped by 16.3% year on year, output in heavy industries, especially those affected by government capacity curbs and property controls, was less rosy.

Output of steel in volume terms rose only 5.3% year-on-year last month, the slowest in four months, while cement production continued to decline for the fourth consecutive month, although the drop narrowed to 2% from 3.7% in August.

Retail sales, which include spending by households, government departments and businesses, jumped 10.3% year-on-year last month, up from 10.1% in August.

But fixed-asset investment (FAI) excluding rural households, a key driver of domestic demand, rose by 7.5% year-on-year for the nine months through September, the weakest pace since the full year of 1999, NBS data showed. The government only publishes cumulative growth figures for investment.

Many economists say that with economic expansion now set to exceed the government’s target and with President Xi appearing to lessen the emphasis on growth, the authorities may start to tilt towards tightening monetary policy and pushing deleveraging in the real economy rather than in the financial sector alone.

In July this year, Xi pledged to make reducing the debt ratio of state-owned enterprises “the priority of all priorities” and in his report on Wednesday, he reiterated that the government will “press ahead” with its deleveraging efforts and prevent systemic financial risks.

The year-on-year increase in M2, China’s broadest measure of money supply, slowed for 10 straight months to hit a historical low of 8.9% in August before recovering to 9.2% last month. The decline reflects regulators’ crackdown on opaque layers of transactions among financial institutions, especially the shadow banking industry and wealth management products as part of the financial deleveraging campaign.

“The overriding monetary policy bias may tilt towards tightening to tackle the debt issues and assist in the deleveraging process,” Zhou Hao, an economist with Commerzbank AG in Singapore, wrote in a research note.

Although infrastructure spending growth held up at 19.8%, the same pace as in the first eight months, private investment rose at the weakest pace this year. Growth in urban FAI under the jurisdiction of local governments slowed to 8% in the first nine months from 9.7% in the January-August period, NBS figures showed.

Property investment picked up marginally in the first nine months compared with the first eight months, rising by 8.1% year on year. But the NBS breakdown showed a significant slowdown in the housing market, which has been hit by a year-long government campaign to curb a price boom. Growth in new housing starts slowed to 11.1% from 11.6% and completions actually fell by 1.9%, declining for only the second time since December 2015. Sales of new homes in terms of floor space rose by 7.6%, slumping from a pace of 10.3% in the January-August period.

Xi vowed to maintain the government’s housing policy, which may deal a blow to market anticipation that authorities could loosen controls after the National Party Congress.

“We must not forget that housing is for living in, not for speculation,” Xi said in his speech on Wednesday. “We will move faster to put in place a housing system that ensures supply through multiple sources, provides housing support through multiple channels, and encourages both housing purchase and renting.”

Although the government’s policies have curbed developers’ enthusiasm for building homes to sell, policy makers are now offering significant support for the expansion of the housing rental market, which may help cushion the impact of the home-purchase controls.