China’s Trade Picks Up in September 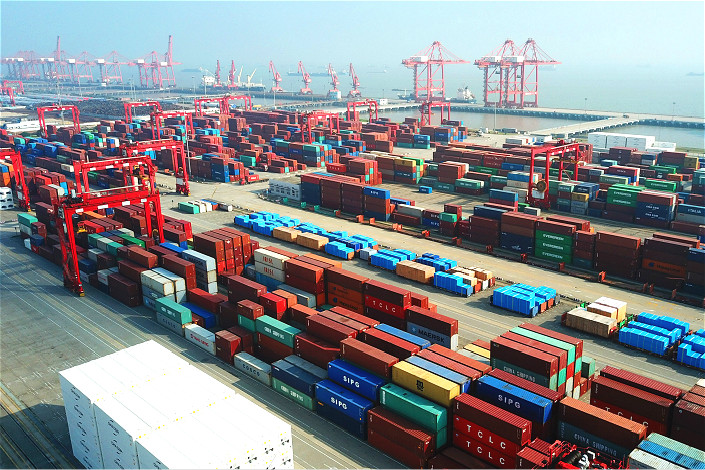 China’s export growth accelerated for the first time in three months in September while imports rose at the fastest pace since March, giving the country a boost ahead of a key meeting of the ruling Communist Party next week.

Overseas shipments rose 8.1% from a year ago to $198.3 billion, the General Administration of Customs said on Friday, up from a 5.6% increase in August but trailing the median estimate for a 10% gain in a Bloomberg News survey of economists.

The stronger figures may partly be due to seasonal factors, such as the timing of the Mid-Autumn Festival, which meant there were more work days in September this year than last year. But they also indicate “a real pick-up” in domestic demand, perhaps due to efforts to shore up activity ahead of the 19th Party Congress, Julian Evans-Pritchard, a Singapore-based analyst with research firm Capital Economics, wrote in a research note.

The congress, which takes place every five years, begins on Oct. 18 in Beijing and is expected to see the retirement of a number of top officials from the Communist Party. President Xi Jinping, the head of the party, is expected to give a political report outlining his vision for the country.

Huang Songping, a spokesman for the customs administration, gave an upbeat outlook for the country’s trade performance for the rest of the year in spite of uncertainties in the global economy.

“We expect the total value of exports and imports to continue to increase in the fourth quarter, and total trade hopefully will post double-digit growth for the full year,” he told reporters at a briefing.

Diverging monetary policies in different countries, rising global trade protectionism, a high comparison base of China’s trade figures in the fourth quarter of 2016, and increasing competition posed by emerging economies will be sources of uncertainty for the rest of this year, Huang said.

Concerns are growing that trade tensions between the United States and China could erupt into some form of conflict. President Donald Trump in August ordered U.S. Trade Representative Robert Lighthizer to conduct an investigation into whether Chinese companies are stealing American intellectual property. The first hearing took place this week in Washington.

Chen Zhou, a vice president of the official China Chamber of International Commerce, gave evidence at the hearing and warned that penalties imposed unilaterally on China could “trigger a trade war” between the two countries.

Data from China’s customs administration show the country’s trade surplus with the U.S. rose to a record $28.1 billion in September, taking the total for the first nine months to $195.6 billion, up from $184.4 billion in the same period last year. Even so, imports from the U.S. have risen by 19.8% this year, faster than the 11.5% increase in exports to the country.

Shipments to other major trading partners also increased at a slower pace than purchases in the first nine months of the year, customs data show. Exports to the EU, Japan and the 10-member Association of Southeast Asian Nations group rose 8.8%, 4.7% and 8.3%, respectively, while imports jumped 16.6%, 15% and 22.1%, respectively.

A recovery in commodity prices helped boost the value of imports, but the volume of purchases also rose in September. Iron ore imports jumped to a record 103 million tons, while copper imports were the highest since March, calculations based on customs data show, reflecting robust demand from industry. Imports of mechanical and electrical products rose by 17.6% year-on-year, up from an 11.9% pace in August.

The upbeat trade data add to evidence that the third quarter of 2017 will end on a strong note. The official manufacturing Purchasing Managers Index for September, released by the National Bureau of Statistics (NBS), rose to its highest level since April 2012, as new orders grew at the fastest rate in more than five years. Although the Caixin China General Manufacturing Purchasing Managers’ Index fell last month from August, it was still well above the 50 mark that divides expansion from contraction.

On Oct. 19, the NBS is scheduled to release other key economic indicators for September, including industrial output, and third-quarter gross domestic product (GDP) data. The economy grew 6.9% year-on-year in the first and second quarters of this year, exceeding the government’s 2017 full-year target of “around 6.5%.” GDP probably rose 6.8% in the third quarter, according to the median estimate in a Bloomberg News survey of economists.

Although economists are more positive about the export outlook because of the improvement in the global economy, some see the strong growth in imports as unsustainable. Capital Economics’ Evans-Pritchard said imports may face “a sharper slowdown” after the party congress, as support to the economy from a loose fiscal policy reverses and local governments are forced to rein in spending in the final months of the year to meet budget targets.

Imports fell for nine of the first 10 months of 2016, but rose in the last two months. Economists at investment bank China International Capital Corp. said they expect import growth in the fourth quarter of this year to be slower because of the higher base for comparison.