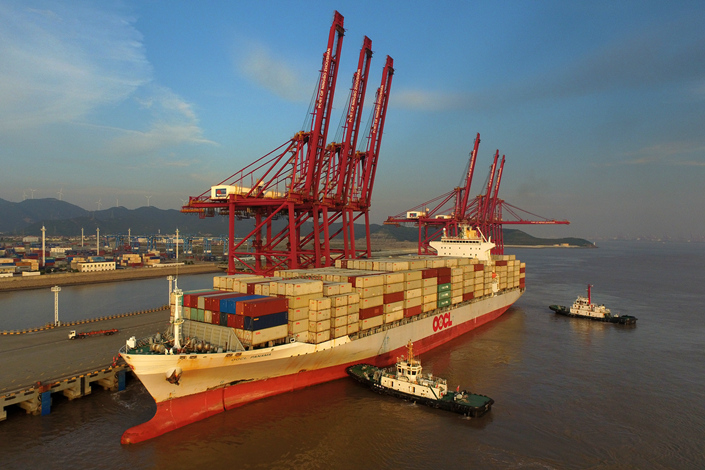 China imports soared 13.3% in August from a year ago to $157.2 billion, picking up from a gain of 11% in July. Above, a ship docks at a port in Zhoushan, Zhejiang province, on July 14 to unload containers. Photo: Visual China

Exports in August rose 5.5% year-on-year to $199.2 billion, their weakest growth rate since the 1.9% drop in February, when shipments were distorted by the Lunar New Year holiday, according to figures from the General Administration of Customs.

“China’s overall export growth continued to ease in August, pointing to a softening of global demand momentum, with a pickup in the expansion of shipments to emerging Asia and the U.S. more than offset by slower growth of exports to the EU and Japan,” said Louis Kuijs, a Hong Kong-based analyst with research firm Oxford Economics.

Year-on-year growth in exports to the U.S., China’s second-largest trading partner after the European Union, remained above 8% last month — barely changed from the July figure, according to Caixin’s calculation based on customs figures.

Trade tensions between China and the U.S. have grown as Washington has become increasingly impatient with what it sees as Beijing’s insufficient pressure on North Korea to drop its nuclear and ballistic-missile programs. In a high-profile move, U.S. President Donald Trump signed an executive memorandum in mid-August asking for an investigation into whether Chinese companies are stealing American intellectual property.

Defying Trump’s repeated threats of military action, Pyongyang on Sunday claimed that it has tested its latest and most powerful nuclear weapon — a miniaturized hydrogen bomb that could be loaded onto a long-range missile.

Kuijs cited volatile bilateral trade ties as a major uncertainty for China’s exports in coming months: “Downside risks to exports remain, in particular in the area of U.S.-China trade relations.”

Exports to the 10-member Association of Southeast Asian Nations rose 6.4% year-on-year in August from a year ago, picking up from a rate of 1.3% in July.

The yuan has strengthened more than 6% against the U.S. dollar this year thanks to the greenback’s weakness, China’s ongoing crackdown on capital outflows, the country’s stronger-than-expected economic growth, and reforms to the central bank’s mechanism for setting the Chinese currency’s daily trading midpoint.

But economists are not all that concerned about the impact of the yuan’s appreciation on the outlook for China’s exports.

“The yuan’s appreciation against a basket of currencies has been mild … and will not weigh too much on exports,” said analysts with investment bank China International Capital Corp. Ltd.

“Furthermore, the yuan’s strengthening against the dollar will help balance China-U.S. trade,” they said in a report.

Analysts attributed the faster growth in August’s imports to resilient domestic demand as well as quicker increases in commodity prices.

“(Month-on-month) import volumes for a number of major commodities, including iron ore, copper, refined oil and coal increased notably in August, reinforcing the expectation for some decent rebound in August domestic economic activities,” JPMorgan economists said in a note.

But Julian Evans-Pritchard, an analyst with research company Capital Economics in Singapore, saw the rise in commodity imports as “unsustainable” because the government’s policy to reduce credit risk is likely to cause a slowdown in investment.

“Looking ahead, we think further downside to exports should be limited by the fairly positive outlook for China’s main trading partners,” he said in a report. “However, we doubt that the current pace of commodity imports is sustainable given signs that capital spending is slowing and that policy tightening is weighing on credit growth.”