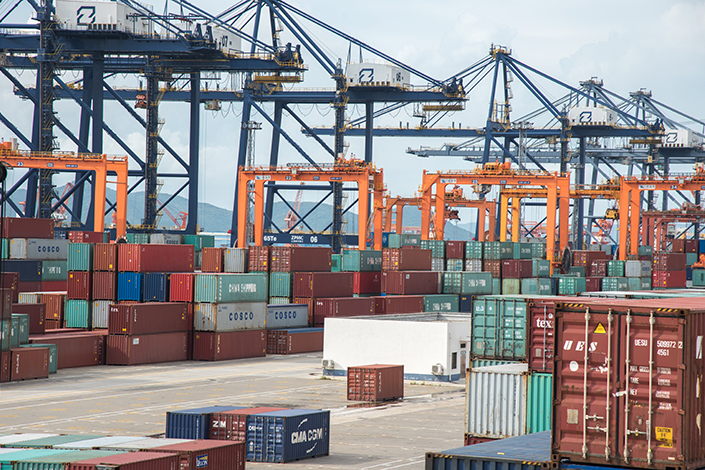 China’s exports in July rose 7.2% from a year ago to $193.6 billion, while its imports rose 11% year-on-year to $146.9 billion. Both figures failed to meet economists’ expectations. Above, a view of Gaolan Port in Zhuhai, Guangdong province, on July 1. Photo: Visual China

(Beijing) — Growth in China’s exports and imports moderated in July, marking their first deceleration in three months and raising concerns that momentum in the world’s second-biggest economy is starting to cool.

China’s exports rose 7.2% last month from a year ago to $193.6 billion, less than economists were expecting and down from an 11.3% year-on-year increase in June, according to data released by the General Administration of Customs on Tuesday. Excluding the decline of 1.9% in February that was partly due to the impact of the Chinese New Year holiday, it was the slowest monthly growth of this year.

Imports, which have rebounded strongly this year after a weak 2016, rose 11% year-on-year to $146.9 billion, trailing economists’ forecasts and down from a 17.2% jump in June. Imports of iron ore and coal fell in July in volume terms both on yearly and monthly basis, while crude oil imports dropped month-on-month. July’s trade surplus was $46.7 billion for July, higher than June’s $42.8 billion but down from $48.3 billion in July 2016.

“Overall, today’s data imply that the Chinese economy may not have had quite as strong a start to the third quarter as previously thought,” Julian Evans-Pritchard, a Singapore-based economist with research firm Capital Economics, said in a report. “Looking ahead, we think further downside to export growth should be relatively limited given the positive outlook for China’s main trading partners. But with the headwinds to domestic demand from policy tightening increasing, we think the slowdown in import growth has further to run.”

Iron ore import data are closely watched as they give an indication of future demand for steel, which is a key raw material in infrastructure and property construction. The volume of imports fell 2.4% year-on-year, the first drop since April, and declined 8.9% month-on-month. Coal purchases were down 8.3% by volume year-on-year and 9.9% month-on-month, while copper imports were little changed month-on-month and crude oil imports were down 3.8%. Economists at JPMorgan Chase & Co. said the declines “may hint at potential softening in near term economic activities.”

Some economists see export growth slowing partly due to the impact of a stronger yuan, also known as the renminbi (RMB), which appreciated 3.3% against the U.S. dollar in the first seven months of the year. Growing trade tensions with the U.S., China’s biggest overseas market, are also casting a cloud over the outlook. Reports that the administration of President Donald Trump will start an investigation into China’s trade practices and expectations of retaliatory action by Beijing are raising fears of a trade war.

Although China’s imports from the U.S. jumped by 24.7% year-on-year in July, the bilateral trade surplus of $25.23 billion was the second highest since October 2015.

“Looking ahead, we continue to expect a gradual slowdown in export growth due to downside pressures from RMB appreciation and rising uncertainty over the export outlook,” Nomura International economists wrote after the data release, citing potential sanctions by the U.S. on China’s exports as a concern. “We maintain our call for a gradual and shallow slowdown of economic growth in the remaining quarters of this year,” they said.

U.S. media reported last week that the White House was preparing to open an investigation into alleged Chinese violations of American intellectual property, amid frustration at what Washington sees as insufficient effort by Beijing to pressure North Korea over its nuclear and ballistic missile programs.

Tensions between the two countries had eased after Trump and President Xi Jinping agreed in April to undertake 100 days of trade talks in an effort to boost U.S. exports to China. Although some progress was made, such as allowing American beef back into China, Chinese customs figures showed the country’s trade surplus against the U.S. widened by 5.9% year-on-year in the first seven months of 2017 to $142.7 billion.

Some economists say concerns of a trade war are overblown, given that China supported last week’s resolution at the U.N. Security Council imposing tougher economic sanctions on North Korea after its second test of an intercontinental ballistic missile in late July.