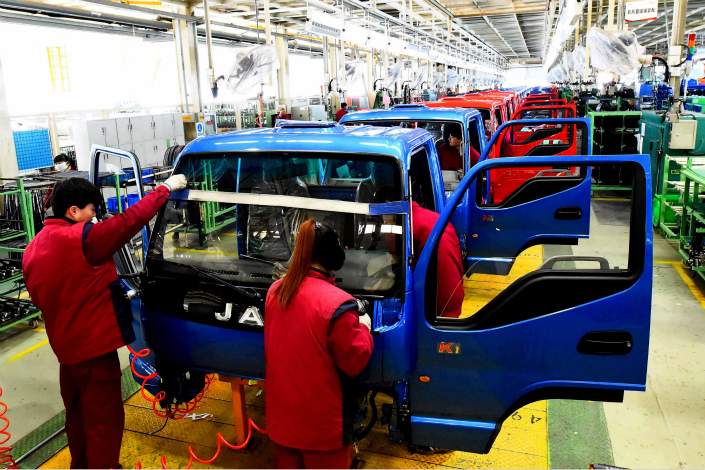 (Beijing) — China’s manufacturing activity was the strongest in four months in July as companies boosted inventories to meet higher demand, especially from abroad, a Caixin survey showed on Tuesday.

The Caixin China General Manufacturing Purchasing Managers’ Index (PMI) — closely watched by investors as one of the first available indicators every month of the strength of the Chinese economy — rose to 51.1 last month from 50.4 in June, the highest reading since March. A number above 50 indicates expansion, while anything below 50 points to contraction.

“Operating conditions in the manufacturing sector improved further in July, suggesting the economy’s growth momentum will be sustained,” said Zhong Zhengsheng, director of macroeconomic analysis at CEBM Group, a subsidiary of Caixin Insight Group. “That said, it’s unlikely that financial regulatory tightening will be relaxed.”

Zhong was referring to the government’s drive since August 2016 to contain credit risks in the financial sector, particularly the “shadow banking” industry and wealth management products, as authorities seek to direct funds away from speculation in financial markets and property and toward investment in projects that generate real economic activity.

Last month, President Xi Jinping told the National Financial Work Conference, a meeting held every five years to map out financial reform, that the financial industry must act in the best interests of the real economy and “allocate more financial resources to the key areas and weak links in economic and social development.”

The pickup in manufacturing activity seen in the Caixin survey contrasts with the decline in the official manufacturing PMI released by the National Bureau of Statistics (NBS) on Monday. The government index fell to 51.4 in July from 51.7 the previous month, the first drop since April, amid weaker foreign demand for Chinese goods and slower growth in output.

The Caixin survey, which is compiled by international information and data analytics provider IHS Markit, showed that the subindex for new orders expanded at its fastest pace since February, with orders placed by foreign customers posting particularly strong growth.

Recovering foreign demand for Chinese goods, accelerating investment in the manufacturing industry and a resilient property market that defied government curbs were the key factors driving the world’s second-largest economy in the first half of the year. Gross domestic product rose 6.9% in the period, beating analysts’ expectations and exceeding the government’s 2017 target of around 6.5%.

Stronger demand led some companies to increase inventories. The quantity-of-purchases subindex rose for the second straight month in July and at a faster pace. Meanwhile, stocks of finished goods declined slightly as some firms said they had run down their inventories to fulfill new orders.

Inflation also picked up in July, the Caixin survey showed, dovetailing with the official manufacturing PMI survey. Average input costs rose at the fastest pace in four months, with a number of firms blaming the increase on higher raw material prices. As a result, companies raised their output prices for the second consecutive month and at a faster rate than in June.

However, manufacturers remained cautious about hiring, with the employment subindex falling to its lowest reading in 10 months. The gauge has been below 50 since October 2013.

Manufacturers’ optimism about the outlook over the next 12 months also fell, with the subindex measuring future output dropping to an 11-month low in July, the survey showed.