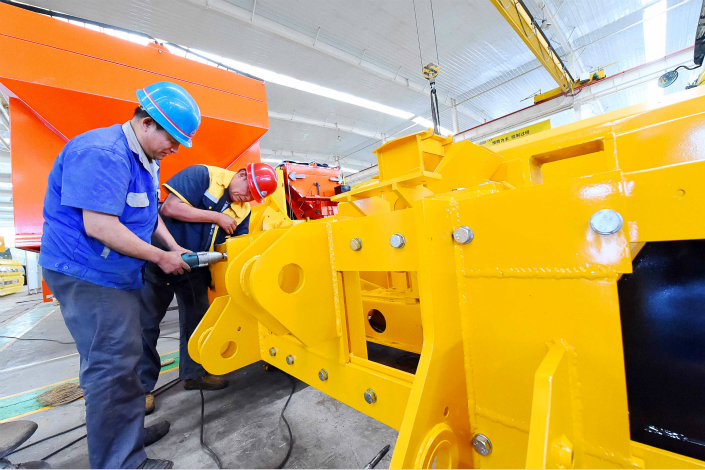 The official manufacturing Purchasing Managers Index (PMI) edged down to 51.4 in July from 51.7 in the previous month, the first decline since April. Above, workers assemble a snowplow on Thursday at a factory in Weifang, Shandong province. Photo: Visual China

The manufacturing Purchasing Managers Index (PMI) released by the National Bureau of Statistics edged down to 51.4 in July from 51.7 in the previous month, the first decline since April, amid weaker foreign demand for Chinese goods and slower growth in output. Readings above 50 point to an expansion in activity while numbers below that indicate contraction.

The non-manufacturing PMI also dropped to 54.5 from 54.9 as a pickup in construction activity failed to offset a softening in other services industries, with gauges for road transportation, property services and household services all falling below 50.

The reports offer the first official picture of the Chinese economy for July and suggest that the strong performance seen in the first half of the year may have cooled at the start of the third quarter. Gross domestic product increased by 6.9% in the first six months of 2017, accelerating from a 6.7% pace in 2016, boosted by infrastructure spending, strong growth in exports and a buoyant property market. In March, Premier Li Keqiang set a GDP expansion target for 2017 of “around 6.5% or higher if possible in practice.”

The independent Caixin China manufacturing PMI report will be released on Tuesday, and its survey of the services sector will be published on Thursday.

The fall in the official manufacturing PMI was mainly led by weaker growth in new export orders, with the subindex sliding to 50.9 last month from 52.0 in June, NBS data showed. Gauges for production and new orders also declined and nearly 40% of companies surveyed complained about rising labor costs.

The statistics bureau attributed the weaker production to the impact of heat waves and flooding that affected large swathes of the country in July, along with continued contraction in oil refining, coking coal and other industries plagued by excess capacity.

“A broad area of the country suffered from persistent high temperatures recently while some regions were afflicted by rain storms and floods, which caused manufacturing activity to slow as some enterprises had to examine and repair (their equipment),” NBS senior analyst Zhao Qinghe said in a statement.

Julian Evans-Pritchard, a Singapore-based analyst with research firm Capital Economics, said the dip in the official PMIs indicates that growth momentum in the Chinese economy has waned as foreign demand has cooled.

“We anticipate further weakness ahead as the crackdown on financial risks weighs on credit expansion and economic growth,” he wrote in a research note, referring to Chinese regulators’ efforts to deleverage the financial sector, and rein in shadow banking and wealth management products.

Other analysts are more sanguine, arguing that strong activity in the steel and construction industries seen in separate PMI reports are positive signs for economic growth.

The steel industry PMI, published on Monday by government-backed industry group CFLP Steel Logistics Professional Committee, came in at 54.9 last month, the third straight month of readings above 50 and the highest number since 57.3 in April 2016. The NBS’ non-manufacturing PMI for the construction industry was 62.5 in July, up from 61.4 in June, Zhao from the NBS said.

Vaninder Singh, a Singapore-based economist with NatWest Markets, the investment banking division of British bank RBS, said what is “much more striking” within the steel figures is that while finished goods inventories shrank, new orders expanded rapidly, which “paints a very strong domestic construction activity picture” especially for infrastructure as property construction has been slowing.

The business expectations subindex for the manufacturing sector rose to 59.1 in July, the highest reading since February, while a similar index in the nonmanufacturing PMI survey was unchanged from June at 61.1 which was the strongest in three months, indicating companies are confident about the outlook.

The subindex of input costs of main raw materials in the manufacturing sector surged to 57.9 in July from 50.4 in June while output prices at the factory gate rebounded to 52.7 from 49.1, NBS figures showed, suggesting that deflationary pressures seen in the past few months are receding.

“Monetary conditions have largely stabilized and even improved in certain aspects since June, lending support to the overall inventory cycle and broader aggregate demand growth,” they wrote in a report.