China’s Leaders Set Out Economic Agenda for Rest of 2017 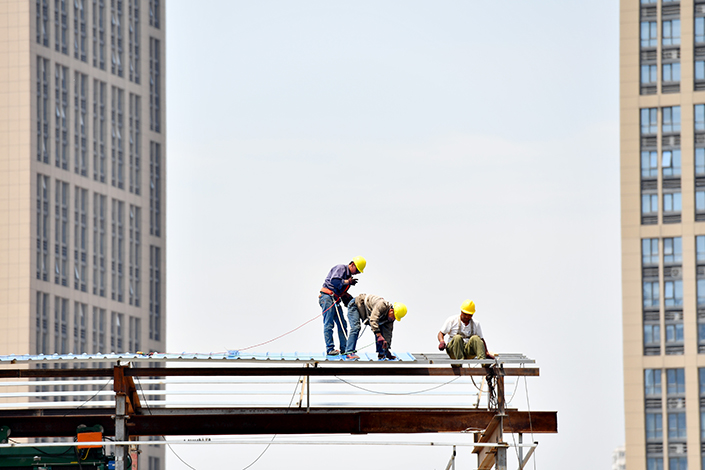 The Chinese Politburo emphasized at its most recent meeting that the government’s proactive fiscal policy, and prudent and neutral monetary policy, will be maintained, suggesting that the country's top leaders are focusing on financial reform rather than growth. Above, workers are seen at a construction site in Zhengzhou, Henan province, on May 19. Photo: Visual China

(Beijing) — China will focus on containing systemic financial risk, pushing ahead with structural reform, deepening a crackdown on financial irregularities, and maintaining controls over the property market in the second half of the year, the country’s top leaders said.

The announcement, made after a meeting of the Politburo, the group comprising the ruling Communist Party’s most senior 25 officials led by President Xi Jinping, sets the tone for economic policy for the rest of the year. The leaders vowed to guard against systemic financial risks, and to maintain continuity and stability in policies to “create a good environment” for the 19th National Congress of the Communist Party later this year, when a major reshuffle of high-ranking officials will take place. The meeting, which focused on the economy, also reiterated on Monday that the government’s proactive fiscal policy, and prudent and neutral monetary policy, will be maintained.

The Politburo statement suggests that leaders are less worried about supporting growth after better-than-expected gross domestic product (GDP) data gave the government a window of opportunity to focus on longer-term reforms. GDP increased by 6.9% in the first half of 2017, official data showed this month, beating the government’s full-year target for growth of about 6.5%.

The International Monetary Fund, in its “World Economic Outlook Update” released on Monday, raised its projection of China’s growth rate this year to 6.7% from a 6.6% pace forecast in April due to a “stronger than expected outturn in the first quarter of the year underpinned by previous policy easing and supply-side reforms.” It also raised its estimate for 2018 growth to 6.4% from 6.2%.

“Given that economic growth has been stronger than expected, the (Politburo) meeting placed its emphasis more on accelerating reforms,” economists with CEBM Group, a subsidiary of Caixin Insight Group, said in a note on Tuesday. It “first put forward the points that (the government will) take the bull by the horns by firmly continuing with the disposal of zombie companies, and that (it will) effectively regulate local government financing and resolutely curb the growth of hidden debt.”

“After that, it reiterated that it will deepen the crackdown on financial irregularities and strengthen financial regulatory coordination to improve the efficiency and level of the financial sector’s service for the real economy,” the economists wrote, adding that this shows “that deleveraging the real economy has taken priority over financial deleveraging.”

The Politburo at its meeting agreed that China will prioritize supply-side structural reform, a key part of which is to reduce excess capacity in industries such as steel and coal, and enable the market to play a more active role in letting money-losing and debt-laden companies known as “zombies” fail, according to the statement, released through the official Xinhua News Agency.

“(We) must be sober-minded and keep our strategic focus unchanged, firmly stick to the supply-side structural reform and appropriately defuse potential major risks to promote the sustainable and healthy development of the economy and society,” the statement said.

The government started implementing a campaign to cut excess capacity in the steel and coal industries in 2016 after prices tumbled, plunging companies, many of them state-owned, into deep losses and increasing the risk they would defaults on bank loans and bonds. The drive has led to a jump in steel and coal prices and shored up the bottom lines of producers.

A similar initiative is now underway in the aluminum, cement and glass industries, and “active progress” has been made, Zhang Feng, chief engineer and spokesman of the Ministry of Industry and Information Technology, said at a news conference on Tuesday.

Reiterating the concerns of the National Financial Work Conference held earlier this month about containing financial risk, the Politburo statement said that the country “must ensure the protection of our bottom line that systemic financial risk will not occur.” It pledged to “effectively regulate” local government financing and firmly rein in growth in their hidden debt.

China’s local authorities have been increasingly exploiting alternative financing schemes such as public-private partnership projects and services procurement contracts to cover up their borrowings, after the government strengthened controls on local government financing vehicles — companies set up specifically to fund spending outside of the budget.

The leaders also indicated they will continue with regulatory tightening in the financial sector and the real estate market despite concerns that the policies have added downward pressure on economic growth.

The Politburo statement said authorities will “deepen” the crackdown on misconduct in the financial sector and strengthen regulatory coordination to ensure that money is used to fund real economic activity rather than financial speculation. Policies on the property market will be kept “stable,” and the statement reiterated previous pledges to speed up the establishment of a long-term mechanism to stabilize the property market, which could involve the use of fiscal, financial, tax, land and legislative measures.

The financial sector, especially the shadow banking industry and wealth management products, has been the focus of government efforts to deleverage the economy and contain financial risks since August after a similar Politburo meeting on economic issues. The intensifying campaign has led to tighter liquidity conditions in the interbank market, which oils the daily wheels of the financial system, and to higher interest rates on money-market instruments used by the central bank to manage liquidity.

Many local governments have stepped up real-estate controls since September to cool a boom in home prices, typically by raising down-payment requirements and imposing limits on the number of properties individuals can buy. Banks have also raised interest rates on mortgages.