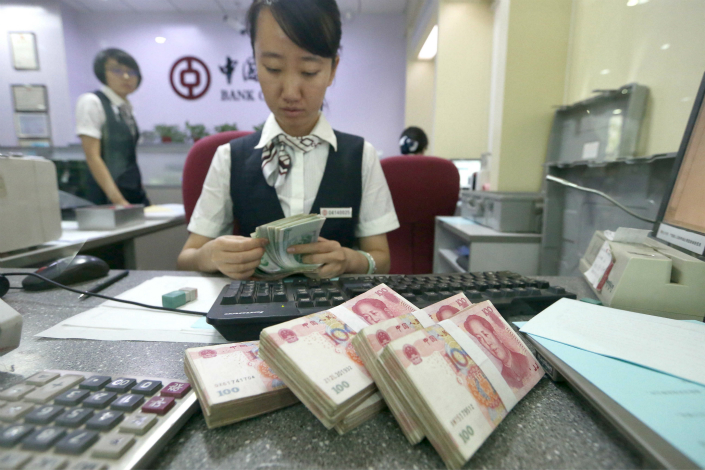 The combined debts of banks and other deposit-taking institutions fell to 71.2% of gross domestic product (GDP) at the end of March from 72.4% at the end of 2016. Above, a cashier counts money at a bank at Taiyuan, Shanxi province on July 17. Photo: Visual China

(Beijing) — The Chinese government’s campaign to force the financial sector to curb its soaring debt levels appears to have had some initial success, with a new report showing that a key measure of liabilities fell in the first quarter.

The combined debts of banks and other deposit-taking institutions fell to 71.2% of gross domestic product (GDP) at the end of March from 72.4% at the end of 2016, when measured by the liability side of their balance sheets, according to estimates from the Center for National Balance Sheet Studies (CNBS) under the National Institution for Finance & Development, which is part of the state-backed think tank, the Chinese Academy of Social Sciences.

That’s the good news. The bad news is that debt racked up by Chinese companies, households and the government continued to rise, amounting to 237.5% of GDP by the end of March, up from 234.2% at the end of December. The growth was due to higher borrowing by the corporate sector and individuals, the report said.

“The increase shows it is extremely difficult to achieve the goal of deleveraging the economy while maintaining growth,” Zhang Xiaojing, one of the authors, told Caixin.

Since the global financial crisis, China’s debt has soared as the government encouraged lending to support the economy. Local governments also went on a spending spree to fund infrastructure construction to bolster growth. The credit boom has inflated asset bubbles, left companies and local governments burdened with unsustainable debt levels, and sparked widespread concern that the world’s second-largest economy could experience some sort of banking or financial crisis.

The outstanding stock of total social financing, the broadest measure of credit in the economy that includes bank lending, bond issuances and entrusted loans, more than quadrupled over the last eight years, jumping to 156 trillion yuan ($23.1 trillion) at the end of 2016 from 38 trillion yuan at the end of 2008, data from the People’s Bank of China show.

The risks to the financial system and economic growth from the debt pile led international credit ratings agency Fitch to cut China’s sovereign credit rating in 2013. Moody’s followed in May this year, downgrading the country’s rating for the first time since 1989.

The Chinese leadership has also become increasingly concerned about the risks posed by the scale of the liabilities, especially in the corporate sector and local governments. President Xi Jinping stated in late 2015 that deleveraging should be a top priority in economic work. Last week, at a meeting of the National Financial Work Conference, which is held every five years to map out financial reform, he said that the government must press ahead with deleveraging the economy and guard against systemic financial risks. Xi also highlighted the need to reduce leverage among companies and local governments.

The CNBS report said that financial deleveraging had “achieved an initial result” but warned that local governments were increasing their borrowings in spite of a decline in their combined debt-to-GDP ratio of 0.7 percentage points in the first quarter to 22%. It said that local governments were using “alternative financing schemes” to cover up their borrowings, such as public-private partnership projects and services procurement contracts.

“Local governments have not stopped raising their implicit debt in various new forms,” the report said. “The root cause is that local governments do not have sufficient legitimate financial resources to fund their obligations,” it said, calling on policymakers to deepen reforms in the fiscal system including overhauling central-local government fiscal relations and regulations on investment and financing.

The growth in the debt-to-GDP ratio of the corporate sector accelerated in the first quarter, standing at 157.7% at the end of March, up 2.7 percentage points from the end of December and compared with a rise of 2.1 percentage points for the whole of 2016, according to estimates from the CNBS. Deleveraging in the state-owned sector is a priority, the authors wrote, pointing out that borrowing by state-owned enterprises (SOEs) accounts for about 60% of total corporate debt.

Companies took on more debt as they became “motivated to increase leverage and expand production” on the improving outlook for the economy, the report said. China’s GDP grew by 6.9% year-on-year in the first half of 2017, beating analysts expectations, bolstered by solid foreign demand for Chinese goods and recovering investment in the manufacturing sector.

Chinese households saw their debt-to-GDP ratio gain 1.3 percentage points in the first quarter to 46.1%, driven primarily by strong growth in mortgages, according to the CNBS report, despite government tightening policies to restrict home purchases that included bigger down-payment requirements and higher interest rates on home loans.

The report attributed the uptick to the lagging effect of the tightening policies and a boom in the real estate market in smaller cities where there were fewer buying restrictions. “The increasing leverage of the household sector may have shifted from first- and second-tier cities to third- and fourth-tier cities,” it said.