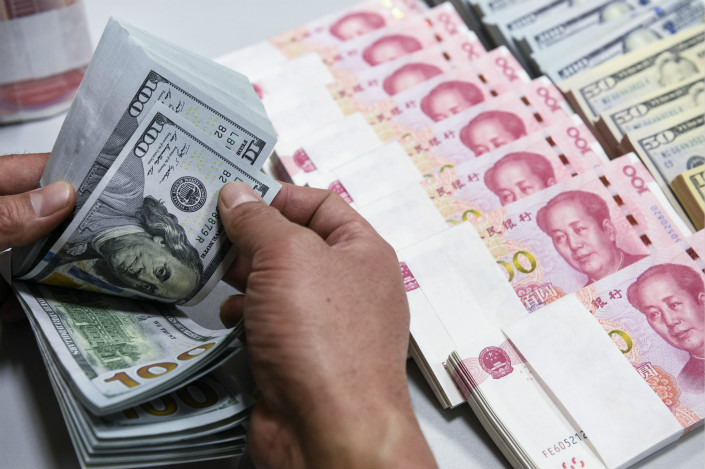 Banks in China sold $3.8 billion more foreign exchange than they bought last month, down from $15.5 billion in July and $9.5 billion a year earlier. Smaller net sales of foreign exchange by banks indicate a recovery in demand for yuan among Chinese individuals and companies. Photo: Visual China

(Beijing) — Demand for foreign exchange in China fell to its lowest level in more than two years in August, government data show, as capital outflows eased due to tightened scrutiny and expectations for continued strengthening of the yuan diminished the appeal of other currencies.

Banks in China sold $3.8 billion more foreign exchange than they bought last month, according to data released by the State Administration of Foreign Exchange (SAFE) on Monday. Although that was the 26th straight month of net sales, the figure was down from $15.5 billion in July and $9.5 billion a year earlier. Smaller net sales of foreign exchange by banks indicate a recovery in demand for yuan among Chinese individuals and companies.

“China’s economy has continued to stabilize and improve, which boosted market confidence,” an unnamed SAFE official said in a statement accompanying the data release. “The yuan’s exchange rate … stabilized and strengthened, leading expectations and transactions by domestic participants in the foreign exchange market to become more rational.

After depreciating 6.5% against the U.S. dollar last year, the yuan has unexpectedly strengthened this year, with a strong rally of around 2% in August that took its appreciation in the first eight months of the year to around 5.7%.

The yuan has benefited from the weakness of the dollar amid concerns over the economic policies of President Donald Trump, and from moves by the Chinese government to support the currency through measures such as tightened scrutiny of capital outflows and a crackdown on capital flight disguised as outbound investment.

The yuan’s strength in August had led many analysts to anticipate banks would be net buyers of foreign currency on behalf of clients in the month, rather than sellers.

Wang Youxin, a researcher with Bank of China’s Institute of International Finance, said one of the reasons for the unexpected net forex sales by banks was that Chinese exporters preferred to be paid in yuan while importers chose to pay suppliers in other currencies on expectations of further strengthening of the yuan.

“Expectations about the yuan’s appreciation … affected the balance-of-trade payments. Therefore, the foreign exchange settlements and sales figures were not as good as people had anticipated,” he said.

Han Huishi, a senior foreign-exchange analyst with a state-owned lender, said he expects data for September to show net sales of yuan by banks for the first time since June 2015 given the currency’s continued strength in the first two weeks of this month.

However, policymakers have moved to contain the yuan’s recent strength due to concerns over the negative impact it might have on the country’s exports and in a bid to discourage investors from making one-way bets that the Chinese currency will keep appreciating.

Last week, the central bank suspended a requirement known as the foreign exchange risk reserve ratio that forced financial institutions buying dollars for clients through currency forwards to deposit 20% of the value of the trades at the central bank. It also told foreign banks they no longer had to set aside reserves for offshore yuan deposits in China. The moves were both seen as a signal of the government’s intention to slow the pace of the yuan’s appreciation.