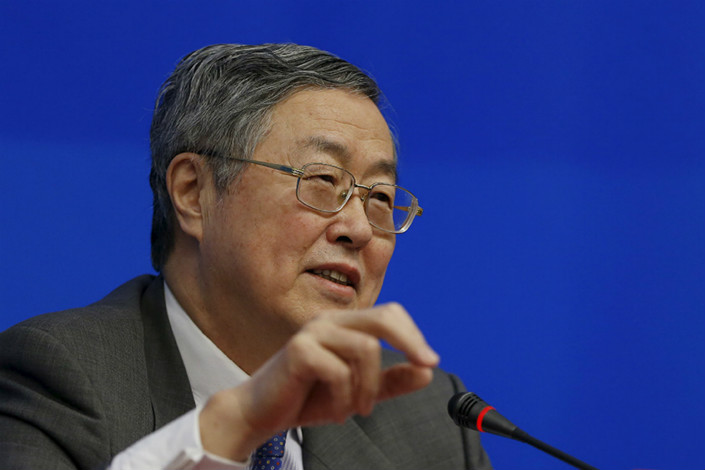 Zhou Xiaochuan said that if "there is too much optimism during a period of prosperity, tensions will build up which could at some point lead to a sharp correction." Photo: Visual China

People’s Bank of China (PBOC) Governor Zhou Xiaochuan said the Chinese authorities must focus on preventing a crash in asset prices that could trigger a financial crisis, reiterating a commitment made by President Xi Jinping this week to guard against financial risks that could derail the economy.

Zhou warned that excessive optimism during a period of strong economic growth and asset appreciation could lead to what’s become known as a Minsky Moment, when asset values collapse suddenly as a result of an unsustainable build-up of debt and speculation fueled by credit.

“When there are too many pro-cyclical factors in the economy, cyclical fluctuations will be magnified,” Zhou told reporters on Thursday on the sidelines of the 19th Communist Party National Congress in Beijing. “If there is too much optimism during a period of prosperity, tensions will build up which could at some point lead to a sharp correction, a so-called Minsky Moment. We must particularly defend against such a sudden, dramatic correction.”

Zhou was responding to a question asking for his assessment of the systemic financial risks facing the Chinese economy after Xi gave a speech at the opening of the Party Congress on Wednesday in which he said the country will continue to strengthen financial regulation and defend against systemic risks, including cutting corporate debt, or deleveraging.

The PBOC governor defined “systemic financial risks” as those that could trigger a financial crisis and cause “acute chain reactions” in the market that would deal a major blow to the economy and employment. He gave as examples runaway inflation, and asset bubbles in capital markets, real-estate, shadow-banking and derivatives markets. He also warned that experience shows that during a country’s transition from a planned economy to a market economy a significant amount of non-performing assets can emerge which can potentially lead to the collapse of financial institutions.

Zhou highlighted in particular the high debt ratio of China’s corporate sector, an issue he also raised on Sunday during the autumn meetings of the International Monetary Fund and World Bank in Washington D.C. Data from the Bank for International Settlements show that China’s corporate debt stood at 166.3% of GDP at the end of 2016, up from 130.6% in 2012, the fourth highest of 43 economies listed by the organization.

Zhou said that China’s corporate debt had been inflated partly because many local governments have raised money through financing platforms or state-owned enterprises, which is therefore classified as corporate rather than government borrowing.

“We should seriously deal with and prevent the unhealthy use of financing vehicles and various debt-taking tools by local authorities,” he said.

Separately, Zhou said the government will continue to open the financial industry to foreign investors and the yuan will become a “more freely used” currency in the long run.

However, he dismissed calls for widening the yuan’s daily trading band against the U.S. dollar, saying there was no need to do so as daily changes in the exchange rate rarely hit the central bank’s limits. The PBOC currently allows the Chinese currency to move 2% either side of a midpoint it sets every day.

“The widening of the yuan’s trading band is not the most urgent issue at the moment,” although such a move could “send a signal” that reform of the foreign-exchange system will “continue to move forward and that the exchange rate is mainly decided by the market,” he said.